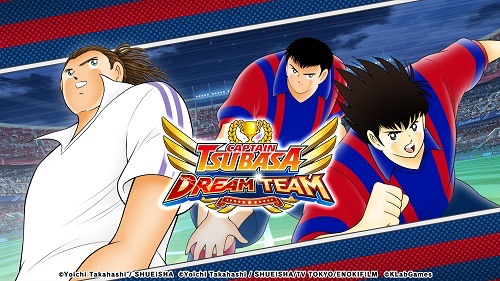 The new story plot was created by Yoichi Takahashi, the original author of “Captain Tsubasa”, and will be produced by KLab under supervision.

The story takes place after the Madrid Olympics in Captain Tsubasa Rising Sun, currently being serialized in the Grand Jump special edition Captain Tsubasa Magazine (Shueisha), and will highlight the appearances of familiar characters in new roles and brand new characters every month in the game.

About the Background of the Start of Distribution

Captain Tsubasa: Dream Team released in 2017 and, as of March 2021, has exceeded 35 million downloads worldwide. The game continues to be enjoyed by players from all over the world.

In addition, KLab has sponsored the Nankatsu SC soccer club represented by Yoichi Takahashi since the 2018 season, hosted worldwide tournaments for Captain Tsubasa: Dream Team since 2019, and continues to interact with “Captain Tsubasa” fans, soccer fans, and game players in various ways.

KLab hopes to realize its vision of “bringing the world together through entertainment” by sharing future story developments in Captain Tsubasa: Dream Team worldwide for “Captain Tsubasa” fans and game players to enjoy together.

Created by Yoichi Takahashi, “Captain Tsubasa” is a Japanese manga that centers on the sport of football. Since premiering in Shueisha’s landmark manga anthology Weekly Shonen Jump in 1981, the series has grown into a legend that has inspired and delighted countless football fans around the world for decades.

Even after the end of the initial serialization, the story has continued to evolve with new works highlighting the growth and development of main character Tsubasa Ozora. The series’ popularity continues to thrive, with Captain Tsubasa Rising Sunfinishing its appearance in Shueisha’s manga anthology, Grand Jump in 2019, and a special issue called Captain Tsubasa Magazine began serialization in 2020.

The series has sold over 70 million volumes in Japan alone. Captain Tsubasa’s popularity extends beyond borders, having been translated and published around the world in 20 languages, finding fans and winning the hearts of football lovers around the globe.

Not available on some devices.

Android, Google Play, and the Google Play logo are trademarks of Google LLC.

All other trademarks or registered trademarks are the property of their respective owners.

KLab is a leader in online mobile gaming. Founded in 2000 and headquartered in Tokyo, the company is listed on the 1st Section of the Tokyo Stock Exchange. KLab has consistently ranked as one of the top 52 grossing game publishers worldwide since 2012. With its emphasis on quality and innovative games, KLab continues to grow at a rapid pace, expanding beyond the Japanese market with an office in Shanghai. For more information about KLab, please visit https://www.klab.com/en/.

Please contact us if you have a question about this article: