Actors Timini Egbuson and Dorcas Shola Fapson who are besties in the movie industry  have both bounce on popular Gambian actress, Princess Shyngle over her expression that it is practically impossible for men and women to be besties without sleeping with each other.

Princess Shyngle had earlier posted views of hers on social media, convincing fans and everyone that men and women who are besties cannot do without sexing each other. 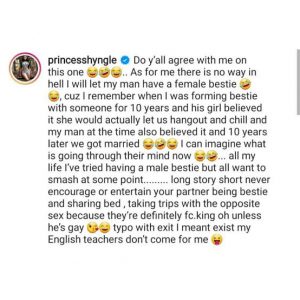 The first wipe of cane on her came from Shola Fapson with the reply in the comment section: “If you’re a harlot just say that”

Afterwards, as a support to Fapson’s response, Timini went on his Snapchat Story to upload a screenshot of what he saw as backlash to Princess Shyngle post.

Whether the trio are actually serious about this and their actions, it has however generate both counter and support reactions from their fans.

Actress Uche Elendu had earlier also responded Princess to speak for herself instead of generalising what she’s naive of.

“People should learn to speak for themselves please @princessshyngle I understand your experience but it doesn’t apply to everyone. I had a male bestie for 3 years, we traveled together, shared good and bad times together, shared money, ideas, prayers BUT NEVER SEX. He is a man and I am a beautiful woman but our priorities and morals were in place,” she said.

“How a personal issue affected me, broke me on my day of victory” – Funke Akindele opens up

I don’t mind cheating in a relationship” Singer, Ric Hassani says as he opens up on his relationship with Waje

FDA suspends services of waakye joint at Oyibi that killed one...