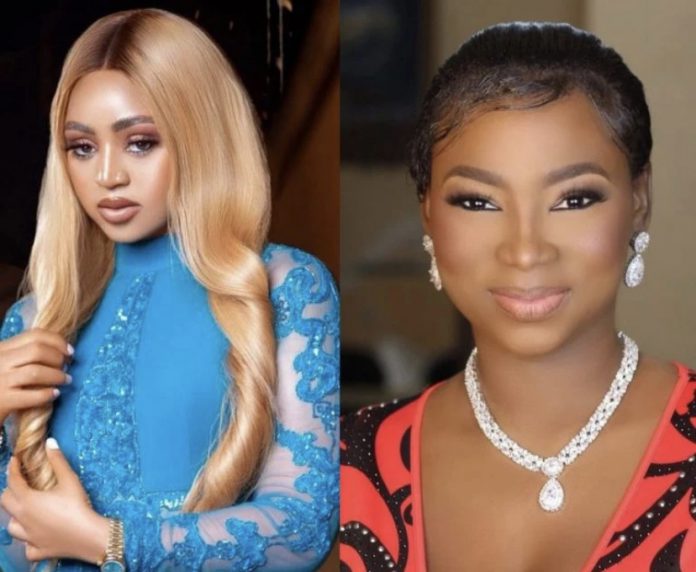 The friendship between the popular aphrodisiac seller, Jaruma and Nollywood actress, Regina Daniels seems to have hit the rocks as the duo has taken to social media to trade words.

The pair had been seen as ‘besties’ after they posted several mushy videos of themselves on their individual social media accounts.

However, the wedge between their relationship began when Daniels took to Instagram to debunk insinuations that she bought and used kayan mata, an aphrodisiac, from Jaruma on her billionaire husband, Ned Nwoko.

Moreso, her statement came shortly after one of the wife’s of Nwoko, Laila Charani, publicly revealed that she is now divorced from the businessman.

Shortly after Charani’s revelation, some fans had accused the actress of using kayan mata to end her husband’s marriage to the Moroccan model.

In her defence, Daniels said via her verified Instagram account, “This is for clarity sake…. I have and will never use any kayamata product. Jaruma paid me to help make random posts for her. I personally gave my terms concerning the kind of posts to be made, I was very mindful with my choice of words so as not to mislead the public, I was simply creating awareness for her brand. Along the line, we became friends, I was warned severally to keep her at arm’s length and mind my association with her but it is not in my nature to judge a person from another’s perspective but in her case, I should have known better.

“She constantly uses every opportunity to create content to profit off my person and my brand even after our payment deal expired. I tolerated it because I believed I understood her person and felt I should give her the benefit of doubt and maintain a cordial friendship. But this time, I will not tolerate Jaruma using this issue that practically portrays me as a bad person for her selfish desires knowing fully well, that I have NEVER AND WILL NEVER USE whatever she sells as I have no reason to…”

“And this is a notice to my fans and the general public, I and my brand As Regina Daniels has no business/association with Jaruma and her products. Thank you.” (sic)

Regina also ended ties with Jaruma while also stating that she would no longer tolerate being portrayed in a “bad light” by the sex therapist.

Her public dissociation with the self-acclaimed sex therapist probably did not sit down right with the Jaruma who also took to her social media page to hit back at Daniels, claiming that she paid her N10,000,000 to advertise her product.

I am scared of sex, says ex-BBN housemate