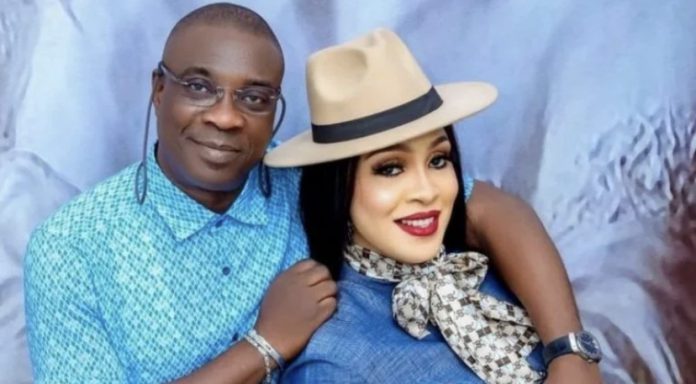 It is quite unusual for the Mayegun of Yorubaland and Fuji Maestro, Alhaji Wasiu Ayinde popularly known as KWAM 1, to show a populace show of feeling. However, recently, he did so as he posted lovely pictures of himself and his new bride, Emmanuella Aderopo, on his social media accounts to the delights of his teeming fans.

Ever since the legendary fuji singer made it known that he had tied the know with Emmanuella Aderopo, on Thursday in Abeokuta, Ogun State in an elaborate wedding ceremony held at the Palace of Alake of Egbaland, Ake, Abeokuta, Ogun state, congratulatory messages has been sent to him by friends, fans and family members.

Prior to being married to the veteran fuji singer, not much was known about the delectable Emmanuella Ropo; hence here are what you probably didn’t know about the latest bride of the fuji legend.

The latest bride of legendary fuji singer, Emmanuella Aderopo attended Yaba College of Technology where she studied Estate Management. KWAM 1’s new bride has a child from a previous relationship.

The Mayegun of Yorubaland refers to his new bride as Nuella Ajike Mi. Oftentimes, he visits her Instagram page to shower praises on her. Aderopo’s pictures are also a prominent feature on the singer’s Instagram page.

She  is a businesswoman in her 40s. She runs a gift store, as well as a liquor store in Lagos. Also, Aderopo is a Forex trader.

Emmanuella Ropo holds a traditional title in Otun Igbehin, Abeokuta, Ogun State; as she is the Otun Iyalode of Igbehin in Abeokuta. Moreso, her father, Stephen Gboyega Odebiyi, was a respected Egba chief who retired from the Nigerian Ports Authority. During her father’s burial, KWAM 1 was present as he thrilled Aderopo’s guest with his sonorous voice.

Myself and Wizkid are not enemies – Burna Boy

Toyin Abraham speaks on a recent review of her movie