A controversial sitcom couple, Mr. and Mrs. Kogberegbe, has promised their fans that the much-anticipated brainchild, Otunba’s Gene, will surpass expectations.

In an interview with Lanre Olakanlu -Mr. Kogberegbe- yesterday, he disclosed that the new series will provide entertainment while bordering on family life for Nigerian-American parents.

“In this context, you are going to see Mr. and Mrs. Kogberegbe in a different form. What you know us for is to always argue and find the solution to couple’s issues in Nigeria but what we’re dealing with now in America is Yèyé Otunba and Otunba with two adolescent kids that we have to nurture.”

“We have to bring in our culture into the affirmative age. That is what you should be expecting. It is going to be a lot of drama, entertainment, comedy, etc.”

“You will love it because we have given it all. We give a lot of what we have learned in the last fifteen years of our career.” 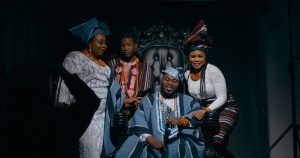 He revealed that the series, a vision of four years, are made to address issues faced by African parents raising their children while living in America.

“Otunba’s Gene is designed to bring in African ideas and culture so that we can learn from it. Most of the African fathers in America don’t know how to deal with our adolescents because it is a different culture entirely.”

“The culture change is going to be an issue for every African father in America to deal with, especially African fathers that migrated from the African continent”, he said.

While explaining the content, Mr. Kogberegbe disclosed that the idea, which has been in the books since four years ago, will be relatable to the African-American experience.

He said, “We’ve been going forth and back on how to make it a perfect content. We don’t want it to look like we’re copying any other content that has existed before now.”

“We took our time to go into it, we realized there’s no content that is focused on Africans in America especially Africans in Nigeria except the feature-length movie that we watch.”

“Most people know us as the family doctor or family hospital where you watch your Mr & Mrs. Kogberegbe in Nigeria. But this content is going to help every African family in America.”

The series, from Creative Village Production, will partner with IFocus Production, one of the most sought-after production studios in America, on a budget of $150,000.

“Oluyinka Davies is head of creative department at High Focus studio and he is on board with us as a creative director. he’ll be directing along Olakanlu Olanrewaju (Otunba Kogberegbe) to be part of the production”, Mr. Kogberegbe revealed.

“What we put into this is a marriage of two production companies who want to entertain, impact, create content for Africans in the diaspora to connect with.”

He further urged fans to anticipate and show support by subscribing to the YouTube channel, Mr & Mrs. Kogberegbe where the first set of episodes will be rolled out for viewing.