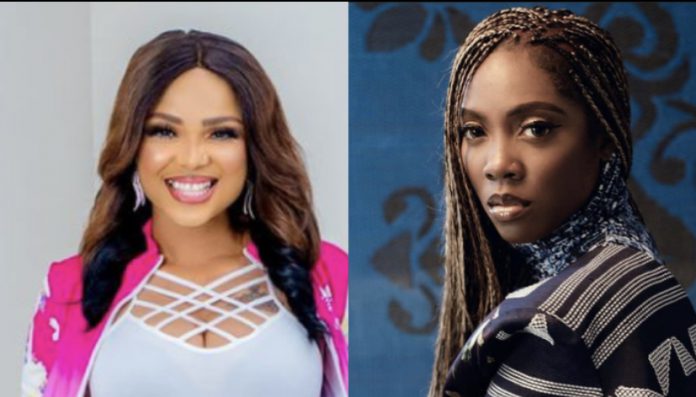 Nigerian singer and songwriter, Tiwa Savage, has gifted a sum of N500,000 to Nollywood actress, Iyabo Ojo, as the latter plans for her mother’s remembrance party.

Ojo took to her Instagram page to share a screenshot of the credit alert, as she appreciated the singer on the caption.

She said, “Awwwwww, my brown chocolate. Our very own African Queen @tiwasavage, God bless you loads. I am so overwhelmed, honestly. Thank you once again. Love you loads. #womensupportingwomen. #vof21.” (sic)

The actress has adopted the hashtag #vof21 to commemorate her mother’s remembrance party, which suggests that the gift from Tiwa Savage was meant for the ceremony.

As Ojo received the cash gift from Tiwa Savage, the actress also revealed that she has received two cows from her friends on Friday.

Sharing a picture of the cows on her verified Instagram page, the actress appreciated the givers for supporting her mother’s remembrance party.

She also revealed that one of her fans gave her cartons of various luxury drinks and wine.

The actress, therefore, is hosting fellow celebrities at an event next month to mark one year anniversary of her mother’s passing.

VOF signifies the acronym of Ojo’s mother’s name, which is Victoria Olubunmi Fetuga.