Kenyan authorities have confirmed the death of the soldiers.

The military said in a statement that the helicopter crashed at around 9 a.m. (0600 GMT) in the county of Kajiado.

The victims were said to be on a training exercise when the helicopter came down in Kajiado County outside the capital, Nairobi. Six people on board were seriously injured.

“This plane came when we were under the hill there. It started making a funny noise, not that of the propeller, it sounded like an ambulance. After 10 seconds it turned and tried to land but it couldn’t. I think it hit that hill and after hitting the hill, it suddenly turned and hit the ground”, said Morris Kirai Emerit, a Kajiado County resident. 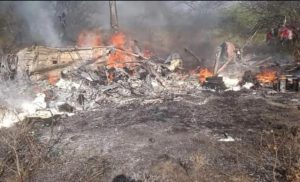 Emerit explained that he helped to rescue two injured soldiers. Kenya’s military confirmed the crash but did not give further details.

According to the police official, there were 23 soldiers aboard the helicopter when it crashed.