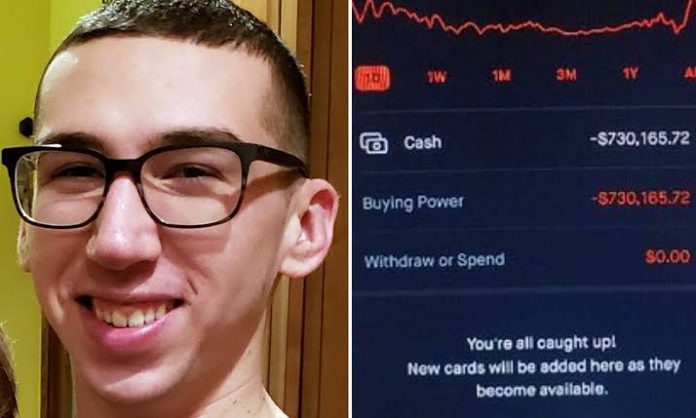 Alexander who was home on break reportedly hurled himself in front of an oncoming freight train in his home town of Naperville, Illinois.

Before killing himself, he left a heartbreaking suicide note, part of which was published online by his cousin-in-law Bill Brewster.

‘How was a 20 year old with no income able to get assigned almost a million dollar’s worth of leverage?’ the note reads. ‘A painful lesson. F**k Robinhood.’

Although the details of Kearns’ trades have not been made public, there is reason to believe that his negative cash balance was merely temporarily displayed as various trades settled, and he was not in fact $730,000 in debt as he believed.

Kearns left this screenshot of his Robinhood account, showing a negative cash balance of $730,165.62. However, there is reason to believe he misinterpreted the display. This note, shared online by Kearns’ cousin, was found after the college student died

From his note, Kearns appears to have been using what’s known as a ‘bull put spread,’ a strategy that limits risk for a trader by both buying and selling put options at different strike prices.

It’s likely that the negative balance appeared in Kearns’ account only temporarily, as one half of the trade settled before the other did. His investing value of $16,176.14 indicates that his account was still in the positive.

25 People, including Children were killed in blast at illegal oil...