Billionaire businessman and Politician, Prince Ned Nwoko has finally broke his silence following rumours that he had obtained a marriage list from the parents of teenage comedian, Emmanuella.
Recall that rumours of Ned Nwoko getting a marriage list from Emmanuella’s parents surfaced online and elicited wild reactions and some people have been itching to know it it was true or false.
Meanwhile, amid the saga, curious netizens who couldn’t get over the issue decided to hear from the horse’s mouth as they stormed his comment section to ask some questions.
One of the commenters drew his attention to the rumours and in response, Ned Nwoko gave a reply that he already has beautiful Wives.
Another Instagram fan with the handle @jennifereverest24 asked the question directly to him this time as she wrote:
“The news about you and Emmanuella, is it true”
Replying, the billionaire business man tagged it as a fake news.
See the conversation below; 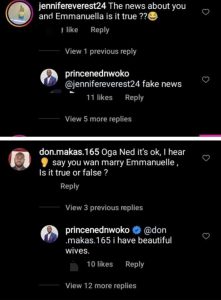 Nigerians Stranded In Turkey Are Back Home