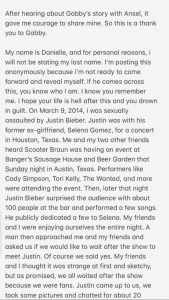 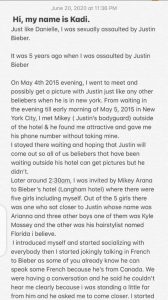 Top Singer, songwriter and pop star Justin Bieber has been accused of sexually assaulting two women, Danielle and Kadi. The duo have bore it all on Twitter by narrating their experiences which left them with a major scar.

According to them, the assaults happened in 2014 and 2015, prior to the star’s marriage to Hailey Bieber.

The first women “Danielle” shared a detailed account of the assault on Twitter, and said that the alleged assault happened when Bieber was still with singer Selena Gomez.

She said she met Bieber at a private show hosted by the singer’s manager, Scooter Braun, in Austin, Texas.

She alleged that after the show “a man then approached me and my friends and asked us if we wanted to meet Justin.”

She then claimed that she and her friends joined Bieber at the Four Seasons hotel, at which point she consented to them kissing.

However, Danielle alleges that their kissing led to the singer removing her pants, at which point she asked him to stop.

“I told him this was going too far and we should stop because I needed to find my friends,” she wrote.

She then said Bieber allegedly told her “they were all OK,” before forcing himself on her.

After Danielle posted her account, Twitter user @ItsnotKadi came forward alleging that Bieber had raped her in 2015.

Kadi wrote that Bieber’s bodyguard invited her up to the singer’s room after a meet-and-greet and they kissed – but that things escalated beyond her consent.

“I asked him to stop and continued to say that I cannot have sex with anyone prior to marriage,” she claimed. However, she claims that he ignored her protests and sexually assaulted her.

It is pertinent to note that Justin Bieber representative, Allison Kaye, has also refuted the claims in a comment to PopCrave. She said that Bieber was staying in an Airbnb as opposed to the Four Seasons on the night in question, and stayed at a different Austin hotel the following evening. “I’m sorry it took so long to respond,” Kaye added, “but we wanted to be respectful and address it with real info.”

Teenager allegedly stabs Friend to Death over Phone in Adamawa