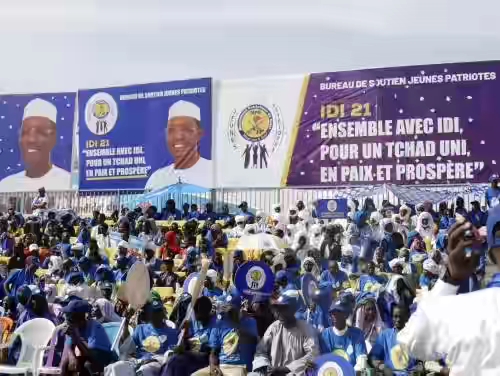 The President of Chad, Idriss Deby Itno is seeking to run for the sixth time after spending three decades in power.

Giant portraits of Deby has filled the streets of the capital, N’Djamena, and the incumbent leader has campaigned on promises of building schools, paving roads and improving living conditions in this country that remains one of the least developed in the world.

Deby is said to have a higher chance of winning in the first round because two of the leading opposition candidates withdrew from the race as part of a boycott and a third man considered a top contender chose not to run.

The only remaining opposition candidate with the resources to campaign outside the capital is Albert Pahimi Padacke, a one-time Deby ally who served as prime minister from 2016 to 2018. Padacke has argued that the opposition boycott only benefits the president.

“Every year, the youth, more and more of whom have only known Idriss Deby Itno, are faced with a more difficult future,” he told Jeune Afrique recently. “Our economy has not benefited from oil resources and has not diversified to create jobs.”

According to a report by Associated Press, one of the remaining opposition candidates, Bruce Guedimbaye Mbaimon, has accused Deby’s party of using state resources to campaign.

In 2018, the country approved a new constitution that allows Deby to run for two more six-year terms.

The landlocked nation of Chad is home to nearly half a million refugees from neighbouring Sudan, Nigeria and Central African Republic. Another 330,000 Chadians are internally displaced, the majority in the volatile Lake Chad region where Boko Haram militants are active.

It was gathered that Chadian soldiers also have been targeted at home: Last year, nearly 100 were killed in an attack that was the deadliest in the country’s history.

Chad has been an oil-producing nation since 2003, which has increased standards of living but also have made the country vulnerable to fluctuations in oil prices. The country also has one of the highest rates of maternal mortality in the world, and female literacy is only about 14%, according to U.N. statistics.