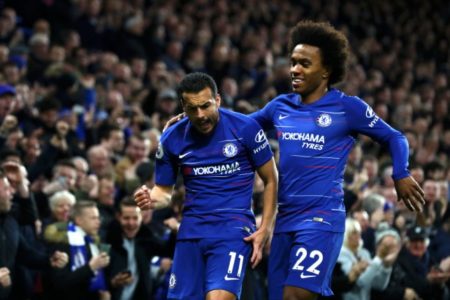 Chelsea have confirmed that both Willian and Pedro have agreed to sign temporary contract extensions with the club, which will keep them both available through the actual end of the season, media reports have confirmed.

This is coming after rumors and reports from earlier yesterday.

As stated by the media, “normally, we would be long done with club football by now, but the three-month delay due to the COVID-19 pandemic pushed everything back and football had to scramble to adjust its normal fiscal and contractual structures that center around June 30.”

Hence after FIFA allowance was granted, the Premier League decided to make June 23 the deadline for agreeing temporary short-term contracts with players whose contracts would otherwise expire on the 30th.

The announcement by Chelsea’s also confirms that both players will be eligible to play not only in our remaining Premier League and the FA Cup matches, but will also be available to play in our Champions League match against Bayern Munich in early August — which, barring a miracle comeback from the 3-0 deficit in the first leg of the Round of 16, will be our one and only match in Europe the rest of this season.
In any case, good news all around, and lovely to see the players agree to stay even if their futures beyond the summer (probably) lie elsewhere.