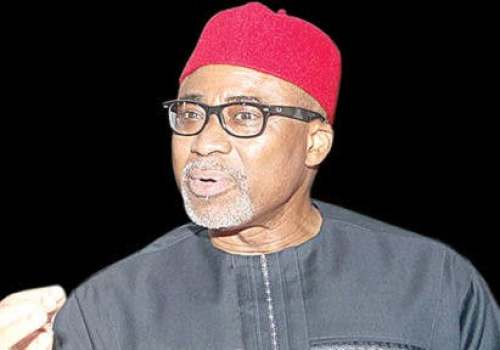 A coalition of civil society organisations (CSOs) has thrown its weight behind the Senate Minority Leader and Senator representing Abia South Senatorial District, Enyinnaya Abaribe, for sponsoring the Armed Forces Service Commission Bill and moving motion for its consideration yesterday on the floor of the Senate.

The group under the aegis of Coalition of Civil Society for Peace and National Security (CSPNS) however, flayed the disposition of some senators towards the bill, describing the bill as timely considering the nation’s security problems which it observed were being fueled by ethnic factors.

Besides, the group said the total disregard to the nation’s federal character principles and elevation of ethnicity in considering service chiefs had made the Armed Forces Service Commission Bill a necessity.

In a statement signed by its National Coordinator, Dr. Mohammed Nagogo, and National Secretary, Barr. (Mrs) Funke Ademola, respectively, the group which flayed the barrage of criticisms that trailed the consideration of the bill, however, said it found consolation in the fact that the sponsor was asked to amend some clauses and re-present it for consideration.

To this end, it tasked the Senate President, Ahmad Lawan, and all other senators to support Senator Abaribe to see to the success of the bill.

“We write to strongly commend  Senator Eyinaya Abaribe for his courage and sense of patriotism for sponsoring a Bill that seeks for an establishment of Armed Forces Commission.

“We applaud him for moving a motion for the consideration of the bill on the floor of the Senate yesterday.

“Although the bill was rejected due to some sentiments, it would have addressed some critical issues that are hindering performance in our Armed Forces,” the statement said.

According to the coalition,” The bill would have addressed the issue of injustice being perpetrated against some geopolitical zones of the country.”

“No doubt, the bill will also encourage commitment and hard work from members of the Armed Forces,” it added.

The group said, “We are surprised that such an important bill that was capable of ending issues promoting insecurity in Nigeria would be discarded in the manner we observed at the National Assembly.”

“Though it was said that the bill is amended and re-presented by the mover,  we hope it was not a ploy to completely discard it.

“We, in the civil society wish to completely align ourselves with the bill.

“We call on the Senate President and other senators not to allow themselves to be used by some external forces who are benefiting from the age-long imbalance that has trailed appointments into offices in the security sector of our country,” it urged.

According to the Coalition, “Senators must look beyond religious, and ethnic sentiments when considering such an important bill.”

“We are, however, glad that there is still a window for the bill to be re-presented hence we urge Senate Minority Leader to make necessary adjustments to the bill and re-present it before the Senate.

“We appeal to all the senators to support this bill in the interest of Nigeria.

“We advise our citizens that we should consider the interest of the country first in everything we do, as it is the only way we can get it right,” the statement further read.

Recall that the senators were on Tuesday, divided over the Bill which Seeks to establish Armed Forces Service Commission by the Abia North senator.

The bill was later rejected during a voice vote and Senator Abaribe called for a division for the lawmakers to vote individually which was also frustrated.

After a closed-door session, the Senate President,Ahmad Lawan said the entire Senate has appealed to the Minority Leader, Senator Abaribe to withdraw Order 73 which called for a division.

Senator Abaribe then withdrew the bill to re-present it another day after consultations.

Recall also that the bill seeks to establish the Armed Forces Service Commission to ensure that the composition/appointment of Service Chiefs of the Armed Forces of the Federation reflects the Federal Character of Nigeria in the manner prescribed in section 217 (3) of the 1999 Constitution.

All we are after is to have one strong and united Nigeria that can withstand and defeat internal and external threats to national security. We need to close ranks and make Nigeria work now and for the benefit of the younger generation and those yet unborn.

Churches want the government to rethink ban on gatherings

Republic of Benin is not aspiring to be a state in...