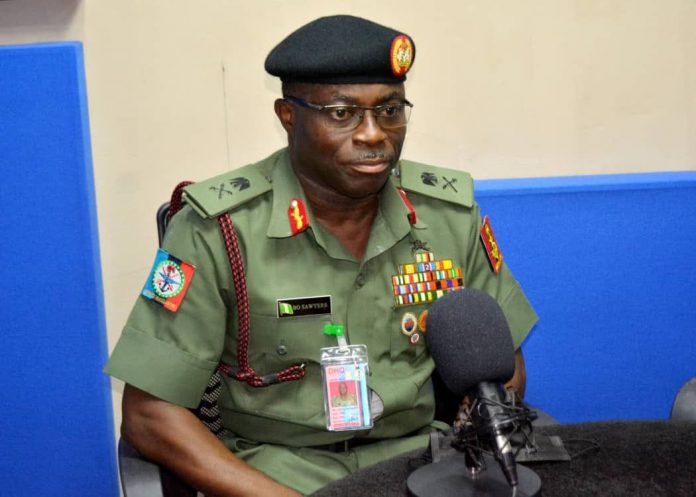 The newly appointed Director Defence Information (DDI) Major General Benjamin Olufemi Sawyerr has appealed to the Nigerian media to continue to project the image of the Armed Forces of Nigeria (AFN) positively, by leveraging its prowess to change the negative perception and narrative following the security situation in the country.

He said this is necessary for Nigerians to appreciate the selfless sacrifices of men and women of the AFN towards ensuring peace and unity of the Nation.

The DDI made the call on Wednesday when he paid a familiarization visit to the Director Generals, Voice of Nigeria (VON) and Federal Radio Corporation of Nigeria (FRCN) in their offices in Abuja.

He noted that the media is a very powerful instrument that coordinates all the elements of national powers to bring about national development.

The DDI urged the media to continue to support and cooperate with the military via positive coverage and reportage of its activities in the quest to move the country in the path of peace and progress.

Maj Gen Sawyerr however expressed his appreciation for the great work the media is doing. According to him, “whenever the media is against a state, the result is that the state will fail,” he emphasized.

The concerted efforts of the AFN, the DDI noted has impacted the mass surrendering of Boko haram terrorists who in recent times are surrendering in numbers with their weapons and families.

He called on Nigerians to support the initiative that has taken years to build, occasioned by the successes being witnessed in recent days.

The Defence Spokesman said the purpose of the visit was to familiarize himself with stakeholders in the media industry that he would be working closely within the course of his duty tour as the image-maker for the AFN.

He added that the visit would also enable him to build a cordial working relationship and a formal interaction with media executives.  In his words “we must cultivate the media, we must parley with them, we must see where our areas of difference converge so that we can be able to move the country forward,” he reiterated.

He equally used the opportunity to solicit for capacity building in the area of broadcast training for personnel of Armed Forces of Nigeria Radio Station (AFNRS).

While responding, the DG FRCN, Dr Mansur Liman expressed readiness to continue to support and promote the operational engagement and activities of AFN in order to avail Nigerians the opportunity to better understand and appreciate what the military is doing in the defence of the nation, most especially in the North East and other areas with security challenges.

He also promised to continue to provide manpower to the AFNRS and as well provide capacity building in the area of broadcast training for personnel at the radio station.

In his remarks, the DG VON, Mr Osita Okechukwu enjoined the citizens to give the military their support and cooperation towards restoring peace and security to the country. He further assured the DDI that VON would use the station’s wide coverage to project the image of the military both home and abroad.

Meanwhile, during the visit of the DDI to the Nigerian Institute of Public Relations (NIPR) Secretariat, the President and Chairman of the Council, Mallam Mukhtar Zubairu Sirajo assured the AFN of the Institute’s readiness to partner and support the AFN in discharging its constitutional duties to the citizens and the nation at large.

He promised to further protect the mutual interest that has existed between the institute and the military spokespersons.