Davido’s signee/DMW’s first lady, Liya was among club goers that were arrested in Lagos for flouting the COVID-19 rules.

The police in Lagos State early Saturday had raided a nightclub and arrested many fun seekers. Clubbing has been suspended in the state as Lagos joins the rest of Nigeria to check the spread of COVID-19.

Lagos police spokesperson, Muyiwa Adejobi who confirmed the arrest of the clubgoers said Commissioner of police, Hammed Odumosu personally led his team on the midnight raid. He identified the club raided as Lounge 38, Bode Thomas, Surulere. 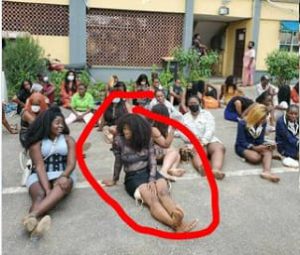 A quick check revealed that a female artiste who was recently signed to DMW by Davido, was among those arrested.

Zimbabwean Judge under investigation after enraged lover leaked his nudes