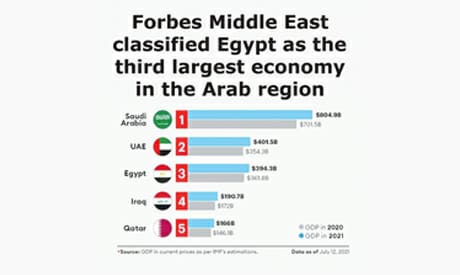 Egypt’s economy has been experiencing remarkable growth amid the coronavirus pandemic and it is expected to continue on the same path.

According to the International Monetary Fund (IMF), Egypt’s economic growth is expected to rebound strongly to 5.2 per cent in the 2021-22 fiscal year, almost doubling the 2.8 per cent growth for 2020-21.

In a meeting with Prime Minister Mustafa Madbouli and Minister of Finance Mohamed Maait on Sunday, President Abdel-Fattah Al-Sisi urged the government to keep up its strong economic performance.

The president stated that maintaining high growth rates was important to stabilise monetary and financial conditions, adding that data should be regularly updated to monitor the country’s economic development.

He recommended increasing public investment, saying that this would help to meet development needs within the framework of the Egypt Vision 2030 strategy.

Maait said during the meeting that the government had managed to boost the country’s revenues by LE119 billion, a 12.2 per cent increase, in addition to achieving a primary budget surplus of about LE93.1 billion, or 1.4 per cent of GDP.

He stressed that the budget deficit had fallen from eight per cent to 7.4 per cent of GDP, adding that Egypt had been one of the most successful countries in reducing its debt-to-GDP ratio despite the coronavirus pandemic that had led many other countries to increase their debt.

“Egypt has succeeded in raising the efficiency of public debt management, and its debt-to-GDP ratio declined from 108 per cent of GDP during fiscal year 2016-17 to 90.6 per cent by the end of fiscal year 2020-21,” he explained.

The IMF said in a report published last week that the economic and social impact of the coronavirus pandemic over the past year had been well-managed by the Egyptian authorities.

“Timely and prudent fiscal and monetary easing shielded the economy from the full brunt of the crisis, while alleviating the health and social impact of the shock,” the report said, adding that the economic policies adopted had helped to deliver macroeconomic stabilisation, safeguard debt sustainability, and preserve investor confidence.

According to the IMF, Egyptian exports are expected to increase from $29.4 billion during the current fiscal year to $32.1 billion in the 2024-25 fiscal year, but will be outpaced by a growth of imports from a projected value of $65.9 billion this fiscal year to $83.8 billion by 2024-25.

According to Forbes Middle East’s list of the largest economies in the Arab region, Egypt is placed third with total GDP expected to reach $394.3 billion in 2021, up from $361.8 billion in 2020.