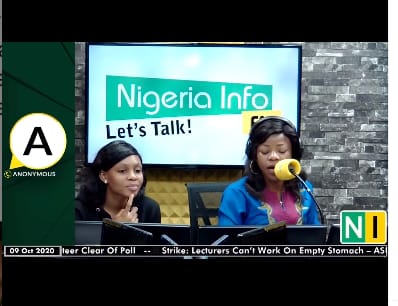 A Nigerian policewoman opined that #EndSARS protest will do nothing to the rot in the system.

While narrating some of the challenges she has been facing even after joining the Force as a graduate and making a vow not to take bribe, she explained that the protest will be ineffective in as much as, “police officers still receive next to nothing while the politicians they also protect take huge sums of money home.

She added that the “system” was created to pauperise Nigerians

The agitated woman who disclosed this in a phone conservation on Nigerian Info stated that even though she earns N53,000 monthly, she has been unable to pay her house rent for 3 years and might be sent packing from where she stays in Ikotun area of Lagos.

She challenged the Nigerian Police Force Spokesperson, Frank Mba to a debate while emphasising that she can’t train her children in police barracks.

The security operative asserted that she also wants to send her children to good schools and live comfortably, stated that same issue will arise when people who are the best in the chosen careers are absorbed into the Nigerian Police Force.

She has been on the job for the past 17 years.