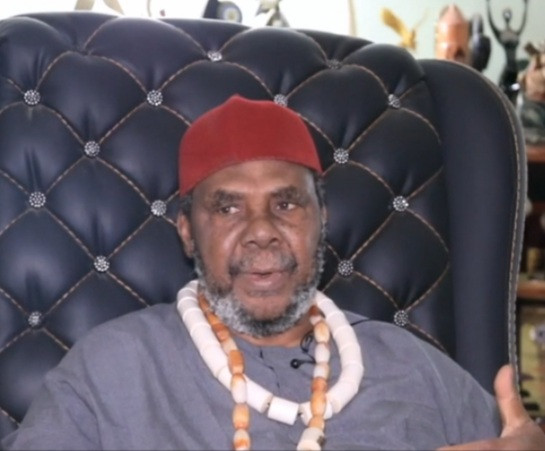 Pete Edochie has pointed out that feminism is the reason for the for the rise in domestic violence and broken marriages.

While speaking to BBC Igbo, the veteran actor stated that feminism isn’t our culture as Africans.

He explained that when a woman leaves her parents and follows her husband, she’s to do whatever her husband wants her to do.

He opined that in most cases of domestic violence, women are to blame because they are no longer submissive.

He also lamented that women today don’t know how to do basic things like cooking to keep their husbands happy, despite getting a formal education.

He added that his mother didn’t get a formal education, yet she cooks a variety of dishes very well in a way that’s pleasing to his father.

He stated, “This thing called feminism, that’s what leads to women getting beaten in marriages.”

“When you talk to a woman, she will respond to you. When she responds to you, you won’t be able to bear it so you’ll stretch out your hand and beat her up.”

He said in Igbo, “Its not everything they explain to you that you people understand. For the record, women’s understanding is limited, let me tell you the truth.”

“I don’t hate them but I’ve had dealings with them a lot, including those at work where I’m the head. Their understanding is limited to a large extent, do you understand?”

He said, “This thing called feminism has no usefulness. We don’t worship women in our culture. White people worship women.”

“If you notice in the western countries, three or four women could arise and say a man touched them inappropriately at work and the man will resign for that reason. Such a thing can’t happen in our land.

“In our culture, if as a woman, no man tells you how good looking you are, you’ll stay in a place, crying, and asking yourself if you’re not good enough to look at. This is how our culture is.”

For the African men, he said a number of them now practice modern trends that are not African, like kneeling to propose to a woman. He went on to condemn this practice.

“Kneeling down to give a woman a ring because you want to marry her is not our culture as Igbo people.

“Any man who kneels in front of the woman he wants to marry, what that means is that he has taken the headship of his family and handed it over to the woman, that’s what it means.”

John Legend’s “All of me” joins the Collection of Most Certified...