The Nigerian Temporary Passport (NTP) for Nigerians in the diaspora was launched by the federal government on Tuesday, March 9.

Minister of interior Rauf Aregbesola who spoke at the launch at headquarters of the Nigerian Immigration Service (NIS) in Abuja, said the NTP is a new genre of passport that will be issued at Nigerian embassies and high commissions to Nigerians who want to return home but whose national passport is not available.

The NTP which is a travel document designed for a one-way travel to Nigeria only, replaces the Emergency Travel Certificate (ETC) which is issued to Nigerians to return home in emergency situations in the case of loss or misplacement of their passport.

The temporary passport is ICAO compliant and it is valid for only 30 days before the date of travel. 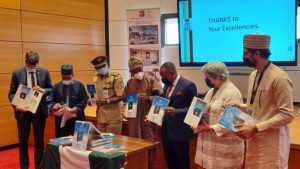 Muhammad Babandede, comptroller-general of the NIS who also spoke at the event described the temporary passport as a catalyst to Nigeria’s desire for effective identity management as it has a chip and surface personalisation ”which is an enhancement of the current Electronic Passport Management System (EPMS)”.