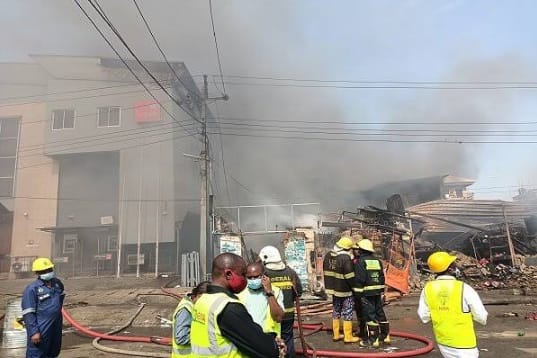 The cause of the fire which was said to have started around 4:20am is yet to be known.

No fewer than seven shops were affected by the fire. The affected shops were reported to have contained various types of explosive items, including domestic gas for sale, vehicle air conditioners, engine oil, paints and other car accessories.

The firefighters had a hectic time putting out the fire due to the inflammable accessories.

The fire, which destroyed goods worth millions, razed a one-storey building situated in the market.

The Director-General of Lagos State Emergency Management Agency, Olufemi Oke-Osanyintolu, who confirmed the report noted that LASEMA team responded at the scene to put out the fire.

“The agency received distress calls on around 6:00 a.m. and activated its response plan. On arrival, the LRT discovered a storey building engulfed in flames.

“The cause of the fire could not be ascertained as at the time of writing this report, and no casualties have been recorded.”

It was reported that a bank in the area evacuated cash from its vault on Wednesday following the fire outbreak.

Ladipo is the major spare parts market in Lagos state.

Ghanaian Man beats Wife to Death over suspicion of Infidelity

Unmarried policewoman sacked for being pregnant