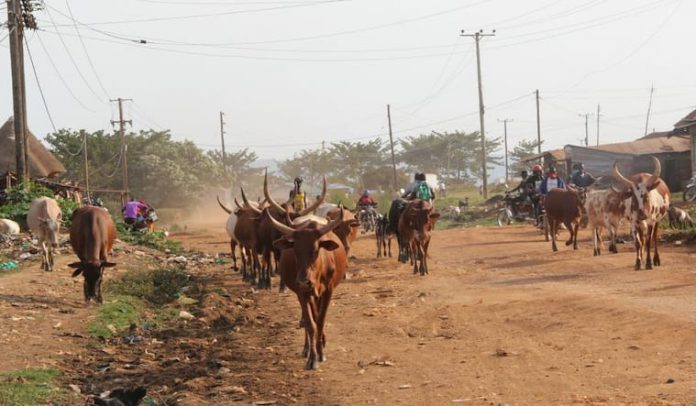 Authorities in Jinja city, the eastern Uganda have confirmed the outbreak of Foot and Mouth Disease (FMD).

It was gathered that the disease is prevalent in Masese, Jinja central business area and Budondo regions.

The public relations officer in Jinja city, Rajab Kiito, while speaking with URN, stated that FMD is mainly affecting pastoralists who graze their cattle along different streets within the city. He explained that the veterinary department has organized meetings with relevant stakeholders to ensure that all animals are sprayed with approved herbicides to contain further spread of FMD.

He disclosed that they have since notified the ministry of Agriculture on the need to vaccinate all the cattle within Jinja city and the surrounding areas. Kiito further says that the city’s veterinary department has set up different checkpoints to ensure that all animals are screened before being cleared to enter Jinja city abattoirs.

Isaac Mudumba, who owns 15 head of cattle, which are infected with FMD stated that he is currently relying on private veterinary officers to contain the disease.

“Two of my cows showed signs of FMD in mid-July and I hired a private veterinary officer to spray them. However, the disease continued to spread to the rest of the animals in the kraal,” he said.

Another herdsman who spoke on condition of anonymity said that he has registered 32 cases of FMD in the past three weeks.

“My herd has been badly hit by FMD, the animals are weakening every day but, I am positive that we shall have a sigh of relief after vaccination,” he said.

Musa Ssozi, the vice-chairperson of the cattle dealers and traders association, noted that prior to last month’s Eid Adhuha celebrations, about 1500 head of cattle ferried from the different parts of the country were left to freely share grazing grounds with local animals within Jinja city.

FMD is a viral disease of cloven-hoofed livestock and wildlife, including cattle, goats, swine, sheep and buffalos. It has occurred several times in Uganda since 1953 when it was first confirmed.

It is characterized by fever and blister-like sores on the tongue and lips, in the mouth, on the teats, and between the hooves. The disease causes severe production losses, and while the majority of affected animals recover, the disease often leaves them weakened and highly unproductive.

Nigeria Ranks 3rd Most Terrorized Country in the World