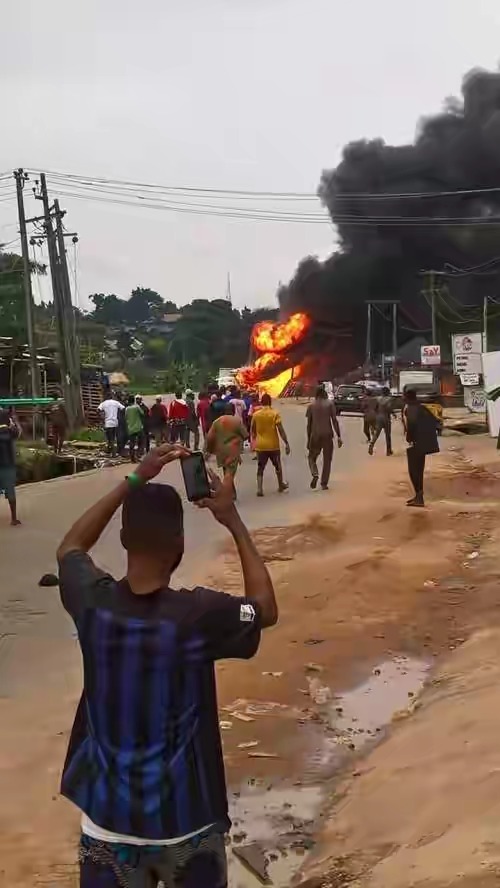 A fuel tanker exploded in the area of Iju-Ishaga, in Lagos, causing a fatal disaster in the environ and for most of the residents in that area.

It was gathered from the LASEMA’s Director of Operations, Engr Olatunde Akinsanya who said, “the tanker which was being operated by Manna Gas Ltd was supposed to offload its content at a gas station, but the station’s owner reportedly refused to allow him because a seal had been broken, indicating that the content had been tampered with.

“Annoyed by the refusal of the station manager to offload the content in his tanker, the driver moved out of the premises.

“A few meters away from the gas station, the front tire of the tanker burst and the gearbox compartment struck the ground causing a spark that led to an explosion when it came in contact with gas that was leaking from the tanker.

“The vehicle ended in a ditch, where a second explosion erupted,” Akinsanya explained.

He added that the 16 injured persons were taken to the Iju Water Works clinic.

Some witnesses disclosed at least one person died in the blast that left 16 others critically injured. Also destroyed were scores of buildings and many cars, some beyond repair.

Lovelyn Maduka, a fruit seller who was close to the scene with her children said, “I would have died with my children.”

According to her, she had just returned from the market and was arranging her wares when the first blast erupted.

Mrs. Maduka and her kids were tending to customers when they saw a thick cloud of smoke rising a few meters from where her stall is situated.

The frightened mother said she and her children were lucky to have escaped because they fled at the first cry of “fire! fire!” by some other residents who were closer to the blast spot.

“We were scared as we saw the smoke, it was too much,” Mrs. Maduka emphasized as she revealed how it took a race through marsh and mud to get her family to safety.

According to eyewitnesses, the second explosion which sent the tanker flying destroyed buildings in its path, including a church.

As at late in the evening on Thursday, the Lagos State Government that the total number of casualties is 30, consisting of 10 adult females and 20 adult males.

The report also stated that two of the 16 in critical conditions have been referred to the General Hospital in Ikeja.

LASEMA figures hint that a total of 23 buildings were destroyed in the blast, while 15 vehicles were left with varying degrees of dents.

The incident occurred around 3pm in the afternoon on Thursday, September 24.

Over 800,000 PVCs yet to be collected in Oyo State, INEC reveals

Why South Africa can’t keep the lights on

Nigeria may split before 2023 elections – Onaiyekan