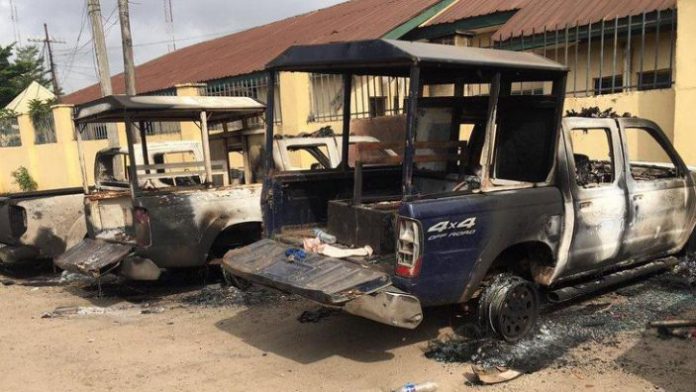 An Igbo group under the aegis of Coalition of South-East Professional Network in Nigeria and Diaspora (CSEPNND), has condemned attacks launched on the Imo State Police Command’s headquarters, in Owerri, the Correctional Centre headquarters in the state, public property as well as security personnel in the state by some criminal elements a few days ago and particularly this morning.

The group which fingered the Indigenous People of Biafra (IPOB), for the act, tasked security agencies to immediately swing into action with a view not only to fish out the perpetrators but also their sponsors to face the law of the land.

Describing the act as not only barbaric but also uncivilized and strange to the South East culture, it warned that unless the madness was immediately stopped, the region may be consumed by actions of the group it referred to as “criminal group.”

In a statement signed on Monday in Abuja by its National President, Prof. Madumere Chika, in reaction to the development, CSEPNND alleged that “this dastardly act is political and well calculated to make Imo State in particular and South East in general, ungovernable.”

“We condemn in totality the barbaric attack on Imo State Police Command’s headquarters in Owerri, Nigeria Correctional Centre headquarters, the military, and some security agencies as well as government properties, by members of the outlawed Indigenous People of Biafra, IPOB. This is not only cowardly but also uncivilized and strange to the culture of the Igbo people,” it said.

The group warned that “This madness supposedly coming from an outlawed group, the Indigenous People of Biafra (IPOB) must be stopped immediately before the whole world starts seeing us as enemies of progress and anti-government. ”

It claimed: “We are aware that this dastardly act is political and well calculated to make Imo State in particular and South East in general, ungovernable.”

“We, therefore, appeal to all Igbo sons and daughters of goodwill to immediately rise up to stop this madness before it consumes all of us,” it added.

According to CSEPNND, “If we allow these criminals to weaken our security agencies in the South East, they will revert to us and make the state more ungovernable for all the citizens.”

It advised supposed sponsors of the act:” For some of our elites who are funding these criminals, we wish to passionately appeal to them to desist forthwith.”

“No matter the political differences, we must know that Imo State belongs to us all and if we destroy it today because of politics, we will be the first victims,” it further warned.

The group blamed security agencies, especially the newly appointed service chiefs, saying they have not lived up to people’s expectations.

It said: “We register our utmost displeasure with those trusted with the security of lives and property in Nigeria, especially the newly appointed service chiefs. We feel they are not up and doing despite the high expectations that greeted their appointments.”

According to the coalition,” We naturally expected that by now, they would have made an impact in the security situation of the country since their appointments but unfortunately, it’s rather deteriorating on the daily basis.”

“The security agencies are losing grip in the South East and this is not good for our country,” it observed.

It said: “The service chiefs must pay necessary attention to the South East immediately before it degenerates into full-blown war.”

“The era of I-don’t-care-attitude by whoever must be put aside. They should wake up to their responsibilities and take decisive action when necessary”, it reiterated.

The group tasked the Imo State governor, Hope Uzodinma to immediately summon stakeholders to a meeting with a view to tackling issues giving rise to the ugly development in the state in particular and the South East in general.

“We also want to call on Governor Hope Uzodinma of Imo State to put aside all political differences and summon an emergency stakeholders’ meeting with a view to addressing this looming danger,” it said.