The husband of Africa’s richest woman, Folorunsho Alakija, Modupe, has been suspended from the prestigious Ikoyi Club 1938 for fighting with a fellow member.

The 72-year old businessman has been suspended for a year. The notice of his suspension which was posted on the club’s notice board and signed by Bamidele Ibironke, the secretary read:

“The above named member of the Club is hereby placed on a one (1) year suspension from the Club for physically assaulting and abusing a fellow member, conduct injurious to the interest of the Club, thereby violating Rule S(C)of the Club’s Rule Book. This suspension takes effects from December 1st, 2021 to November 30th 2022.” 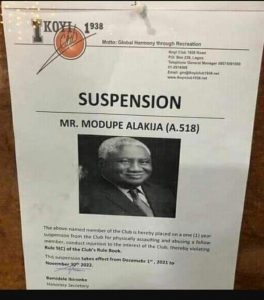 Alakija, whose membership number is A.518, is married to Sharon of Rose’s Folorunsho Alakija, a fashion designer turned major oil industry player and philanthropist.

Modupe Alakija, who is a father and grandfather was born on May 5, 1949, he runs the multi billion Famfa Oil Ltd with his wife, among other companies.

IMF talks will not result in debt haircut – Ghanaian President