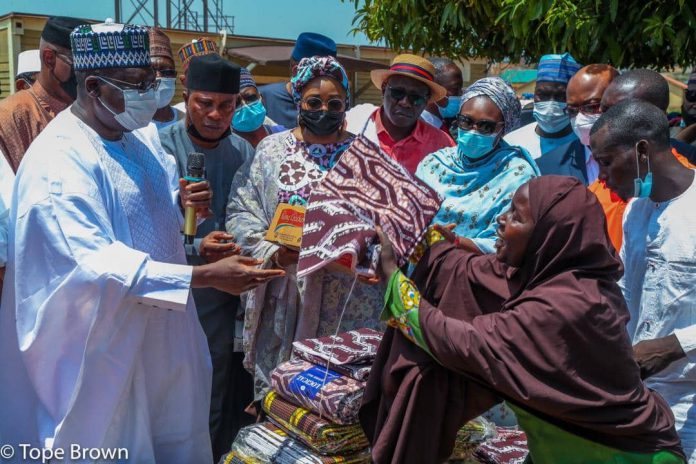 The Senate President, Ahmad Lawan, on Thursday, led a delegation of Senators on a visit to the Wasa IDP camp in southern Abuja to commemorate the 2nd year anniversary of the ninth Assembly.

The Senate delegation during the visit donated food items and other materials worth N10 million naira to the Wasa Internally Displaced Persons (IDP) Camp.

Speaking, the Senate President said the planned visit to the IDP camp was a conscious and collective decision of the upper chamber.

He called on those in leadership position across the country to show empathy to Internally Displaced Persons (IDPs) by ensuring that their lives and dignity are protected.

Lawan said, “This is an Internally Displaced Persons Camp. None of our sisters and brothers in this camp wanted to be here or wish to be here.

“All of them are forced to be in an IDP camp, and those of use especially in leadership positions are supposed to show empathy and commitment in ensuring that while there our compatriots are in this camp and, indeed, any other camp, their life and dignity is protected.

“[And] of course, I’d like to mention here, that we must ensure that these Nigerians who are in this camp and other refuge camps, who are vulnerable in so many ways, receive what is due to them from the government.

“That is to say, there must be sufficient security presence here and, indeed, across the country to protect them.

“[But] they also need the government to do what is right. We are supposed to as a government provide some livelihood here. We must be able to give them something to eat, and we should do so responsibly.

“When I use the word responsibly, I mean not to throw some few things and leave them to eke a living because it is going to be impossible for these people here to eke any meaningful living on their own.

“This is a price we have to pay because of the security situation we have found ourselves. Food alone is not enough.

“So, we will take particular interest in the health facilities available to this camp and, indeed, others.

“We would like to know the details of how and when they fall sick from a major sickness that would go beyond the capacity of primary healthcare – that requires a secondary health care intervention.

“We have a national policy on refugees and people in camps like these, how are we up-to-date with the implementation of the provisions of that national policy? It may sound too hard, but they are necessary questions and we owe these people.”

The Senate President added that the amendment to the Electoral Act by the National Assembly seeks to provide an electoral climate that would enable Nigerians to elect their leaders and representatives.

He explained further that the Review of the Constitution by the ninth Assembly is aimed at ensuring that governance is improved in the country.

According to him, this can be realized through the provision of a legal framework that would provide for good governance at all levels of government.

He disclosed that the National Assembly has been working closely with the executive arm of government to provide more resources to the armed forces and security agencies in the fight against insecurity.

Lawan gave the assurances of the National Assembly to expedite action on the request when received, so as to ensure the return of internally displaced persons to their respective communities across the country.

Buhari accuses Nigerians of being Forgetful