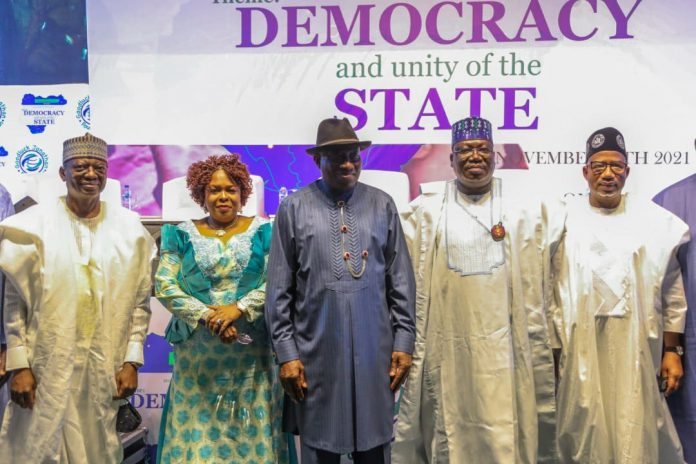 The President of the Senate, Ahmad Lawan on Friday urged the Nigerian political class to continue to engage to make the country a better place.

Lawan spoke in Abuja at the 2021 Democracy Dialogue organised by the Goodluck Jonathan Foundation with the theme: “Democracy and Unity of the State.”

A statement signed by Ola Awoniyi Special Adviser Media to President of the Senate said
the Senate President was full of praises for former President Goodluck Jonathan for his activities while outside office especially for promoting unity in Nigeria and the growth of democracy both within and outside the country.

“At the risk of sounding repetitive, I want to add here, very categorically, that, Sir, you are a man of peace. Sir, You believe in Nigeria. You believe in the unity of this country and what can be more testifying is your engagement outside the office.

“After you left office in 2015, you have decided to work for the unity of this country, to work with the leadership of this country, to ensure that Nigeria remains united. That we remain focused as a people and of course, what can be more apt than what we have here today.

“The theme of today’s dialogue, Democracy and the Unity of the State. It may be pan-African but charity begins at home sir.

“There are many of us here who are not of the PDP group or party. And to me, it’s a clear testimony of one fact, that you are a uniter. That we believe that you mean well for this country and it is so. And for those of us who believe that we will always identify with you and your cause.

“It doesn’t matter who is in the office because we have to have a country in the first place before an election can be conducted. What you are doing, Your Excellency is to show examples of what our leaders can do outside the office after their service. Only God knows what will happen tomorrow but you have given a very good account of yourself.

“When you were President, I was in the opposition. Sir, I supported many of your policies and of course, I opposed those that I felt I should oppose. My belief is, and many of us out there, you have demonstrated very clearly that this country can be great. How? It can be great if the political class decides to be selfless, decides to be honest.

“And I will like to make reference to a statement by our keynote speaker, Professor Abdoulaye Bathily when he concluded his address by saying we need a peaceful and strong Nigeria.

“That’s true. How do we achieve that? We can achieve that if we continue to have this kind of leadership. Whether in office or out of office, we have that responsibility, that obligation to give Nigerians the sense of decent citizenship wherever they are, whatever they are, and wherever they choose to be in this country.

“When you have a marriage bedeviled by suspicion, that marriage is likely to suffer a bit. What we need to do is to behave like you, Sir. As leaders, be open to all manners of people especially those that we lead.

“Today, I there say sir, our major problem, among many, will be the suspicion between the different ethnic groups otherwise why will someone care or bother where the President comes from. Let the President come from anywhere.

“What we need is leadership that will give sense to the people, provides everything within the constraint of resources that the people need.

“We shouldn’t care but when we suspect each other, that’s when people crawl back to their ethnic enclaves and you are doing quite the reverse of that. You are helping Nigeria’s democracy to grow by the day,” Lawan said.

What to do if you fail your matric exams