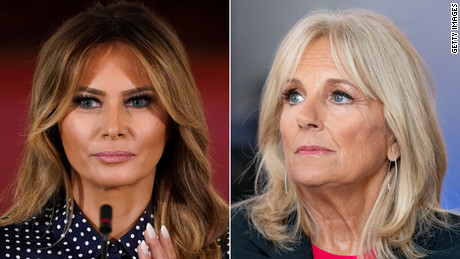 The US First lady, Melania Trump, like her husband, Donald Trump, is reportedly yet to reach out to the first lady-elect, Jill Biden.

This is despite the electoral verdict which has announced since last Saturday that Joe Biden won the US presidential election.

According to a report by CNN, at this period four years ago, Melania Trump was having a tour of the executive residence, at the invitation of then-first lady Michelle Obama, a customary action by the outgoing First lady since the inception of American democracy.

However, as at the time of compiling this report, there is still no movement or action made by the incumbent administration towards a transition of the East Wing and the Executive Residence.

CNN disclosed that most of the focus of the first lady’s office remains on day-to-day meetings and upcoming holiday planning.

“It’s my understanding that its business as usual in the East Wing,” a source intimated CNN

The source stated that even if Melania Trump wanted to begin the process of a transition, the first lady can’t go against her husband’s refusal to accept Joe Biden’s victory.

“I’m not sure it’s fair for anyone to expect them to start transitioning when the President has not yet conceded,”

“If the President concedes, I’m sure the East Wing will be gracious and professional to the incoming administration, that’s just how they work,”

Anita McBride, who served as Laura Bush’s chief of staff, noted that Melania Trump has occasionally expressed opinions different than her husband, but said this time the situation is different:

“This moment is more complicated. Her reaching out before he has conceded could be seen as going completely against what the President and the administration are doing.”

“This transition is going to be a daunting task, even though Dr. Biden is familiar with the White House and extremely capable,” said Capricia Penavic Marshall, who served as a special assistant to Hillary Clinton when she was the first lady.

“By now there would have been at least a conveyance of notes between the current East Wing and the first lady-elect’s team, to talk about dates and schedules and what needs begin to take place,” she said. “There is a timeline to all of this, and what’s happening now is just going to jam it up.”

McBride who was a part of the Bush team who were forced to wait until the vote between Bush and Democrat Al Gore was settled by the Supreme Court.

“We could only begin the transition to the White House after December 13,” she said. “It worked. It was frenetic, but it worked.”

According to McBride, George Bush’s wife, Barbara Bush was not happy to be moving out after one-term, yet she was gracious and insightful when Hillary Clinton came to the White House after the election for the traditional tea.

“Mrs. Bush took Mrs. Clinton up into the residence and through her dressing room to show her the window she would look through, across the Rose Garden, to see into the Oval Office,” said McBride, recalling the congeniality of the visit.

“She told her she would look through it whenever she was missing George during the day.”

Meanwhile, Trump is currently challenging the electoral results in court and some states have already begun recounting votes.

Kenyan man Kills Himself by hanging in Kapoeta