Protesters stormed out in large numbers on Thursday to express their grievances and asked the Nigerian President, Muhammadu Buhari to resign from office. 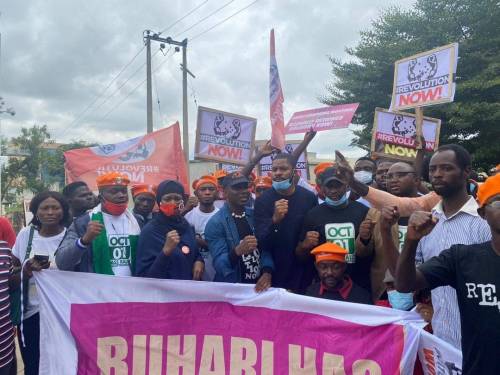 In expressing their grievances, they protested against the hardship, poverty, insecurity, corruption and bad governance being experienced under the President Muhammadu Buhari government in Abuja.

The protest which was held concurrently at different locations in Abuja had large turnouts.

Some of the protesters led by Omoyele Sowore were seen holding big banners which read, ‘Buhari has failed,’ ‘Resign Now’, and other placards had the inscription, ‘Failed leadership has made Nigeria the capital of the world,’ and ‘#RevolutionNow’.

Deji Adeyanju, a human right activist opined that Nigerians have the right to protest against bad government and injustice.

He said “What we are having today is a situation where fear has been instilled into the minds of ordinary Nigerians. It is most regrettable but my appeal to Nigerians is that we should take the bull by the horn and must be willing and ready to pay the sacrifice for our country to liberated.”

He urged human rights crusaders and organisations to rise up and salvage the country from dictatorship and total collapse.

The co-convener of BringBackOurGirls group, Aisha Yesufu who spoke at the US Embassy criticised the President for his incompetence and ineptitude towards the security situation in the country.

“No Nigerian is more than any Nigerian. The President occupied the highest political office. So, his office is less than our own office as citizens.

“I am an employer of the President. I pay the bills for his family and he must protect me. The Commander-in-Chief has failed.”

Yesufu lamented bitterly over the killing of more than 30 policemen in the convoy of Borno State governor earlier this week.

The protesters resisted the presence of armed security operatives in the premises of the embassy and went ahead with their demonstration.

Why South Africa can’t keep the lights on

Kumasi murder: Police on manhunt for other suspects