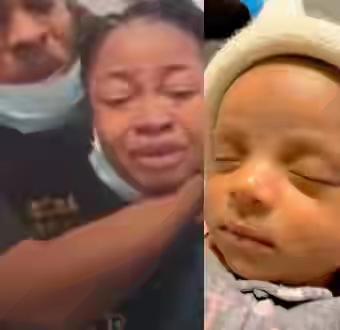 A Nigerian couple identified as Imbul Dooyum Kelvin and Mimidoo Rufina, are demanding justice after one of their two-month-old twin daughters, Zoe, died due to alleged negligence at the Randle Mother and Child hospital in Surulere, Lagos on Friday, January 15.

In a video shared online, the bereaved mother, Rufina, said she brought her child to the hospital for a routine checkup.

She said the doctors told her to breastfeed her baby and while she was breastfeeding, she noticed her baby wasn’t breathing. She said she raised an alarm but the nurses did not attend to her. They allegedly sent her away, telling her that she was making noise.

According to her, it was when her baby had died that the nurses decided to attend to her.

Police arrest 16, recover arms, ammunition, and explosives over killings of...