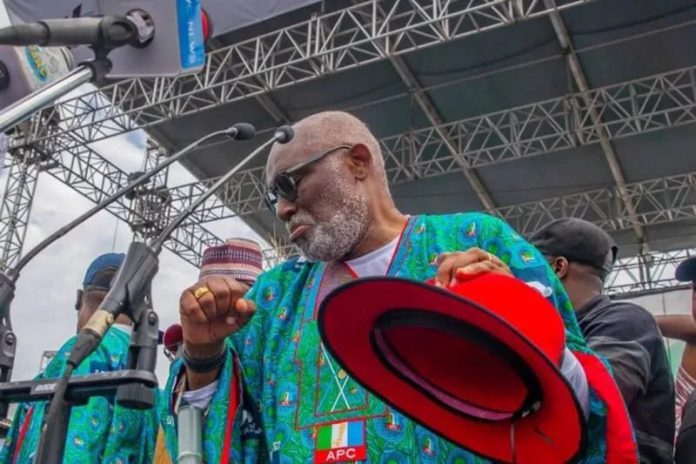 The Nigerian President, Muhammadu Buhari has congratulated Rotimi Akeredolu on his re-election as the governor of Ondo State for another term as he defeated his major counterpart, Eyitayo Jegede.

The President commended the victory of the Ondo State Governor at the election which was held on Saturday, October 10. He stated that the votes gathered depicted that ‘one good turn deserves another.’

He praised the electorate as they comported themselves during the election and their exhibition of decent and orderly manner which shows that the country is making progress in its electoral behavior.

Buhari appreciated the people of Ondo State for the faith they have in their Governor and the All Progressives Congress (APC), he stated that, “the people know the person and party that truly serves them, and have spoken in clear voice and unmistakable terms.”

He lauded the efforts of the Independent National Electoral Commission (INEC) for organizing credible, free and fair election, and to security agencies which ensured that orderliness was enthroned and maintained.

The President advised Akeredolu to be humble and magnanimous in victory, and serve the people of Ondo State even better than he did in his first term, explaining that, “when you serve with heart and might, the people respond in like manner, and we can easily get to where we are headed as a country.”

Meanwhile the incumbent governor, Akeredolu has been relected as the Governor of Ondo State under the All Progressive Congress (APC).

It was gathered that Governor Akeredolu who is a candidate under APC got 292,830 votes, while Mr Eyitayo Jegede of the Peoples Democratic Party and Mr Agboola Ajayi of the Zenith Labour Party came second and third in the election with 195,791 and 69,127 votes, respectively.

Akeredolu won 16 out of the 18 local governments that the state has.

Governor Akeredolu, whose first tenure as governor will expire on February 23, 2021, was declared winner by the Chief Returning Officer for the election, Professor Olayinka.

Professor Olayinka, who is the Vice Chancellor of the University of Ibadan declared on Sunday that, “Having satisfied the requirement of the law and scored the highest number of votes, I hereby declare Oluwarotimi Odunayo Akeredolu of the APC as the winner, and he is hereby returned elected.”