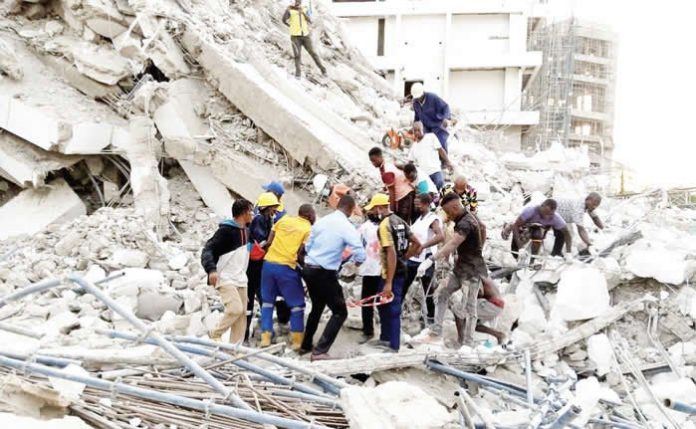 Not less than 10 persons have been reportedly dead as a 21-storey building collapsed on Gerard Road in the Ikoyi area of Lagos State.

The saddening incident which occurred on Monday, November 1 have trapped in many people in the rubble, including the Managing Director, Fourscore Heights Limited, Mr Femi Osibona, who owned the building, and some of his clients and engineers.

According to Punch Metro, the building crumbled around 2pm when workers were on the site.

One of the workers who survived the incident, Gabriel Bassey, told Punch Metro that about 50 persons were still trapped in the rubble.

He said, “This project, 360 Degree, was built by Fourscore Homes Limited. I was trying to plug my phone and not up to five seconds that I left the spot, I saw the building coming down and I ran to safety. We have a lot of people trapped in the rubble, who we need to bring out.

Meanwhile, the Lagos State Government called for calm among residents.

The state Deputy Governor, Obafemi Hamzat, said it was important to cordon off the scene of the incident to facilitate the efforts of professional rescuers and limit casualties.

The Co-ordinator, Building Collapse Prevention Guild, Ikoyi-Obalende Cell, Bola Arilesere, reportedly said, “No building of that scale under construction should collapse unless it was pulled down or some explosives were planted to destroy it. So, something went wrong technically.

“It is likely that some people deliberately tried to cover it up. We only had the structure in place; it suggests a sub-structural failure. We need to dig deep.”

The President, Nigerian Institute of Building, Prof. Yohana Izam, expressed sadness over the incident and the “monumental loss of material resources and human fatalities.”

“There should be a thorough investigation to test the implementation of physical planning and development laws in Lagos and ensure that culprits are heavily sanctioned,” he stated.