The management of the Adekunle Ajasin University, Akungba- Akoko (AAUA), Ondo State, on Sunday has ordered the closure of the institution until further notice following a fatal accident which occurred outside campus that claimed the lives of students. 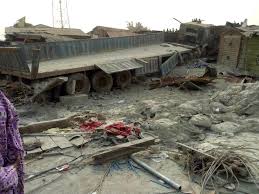 The Akungba accident occurred on Saturday, Jan 23. A cement-laden truck rammed into shops opposite the institution, resulting in the death of several students, 3 of whom are related.

Joe Igbokwe, a former spokesman for the Lagos State chapter of the All Progressives Congress explained that the mother of the three siblings killed in the crash also died of shock on Saturday after hearing the sad news about her children.

A directive to close down the school was thereafter issued by the acting Registrar, Mr Opeoluwa Akinfemiwa.

“Further to our circular of Saturday, January 23, 2021 and the attendant protest by students on Sunday, January 24, 2021, the acting Vice-Chancellor, Adekunle Ajasin University, Akungba Akoko, Prof. Olugbenga Ige, on behalf of the Senate, has directed that the university be closed with immediate effect until further notice.

“All students are therefore advised to vacate the campus latest by 6pm today, Sunday, January 24, 2021.”

Anwiafutu: Body of boy retrieved in mining pit after drowning in...

Strengthen coffee factories to improve the welfare of farmers