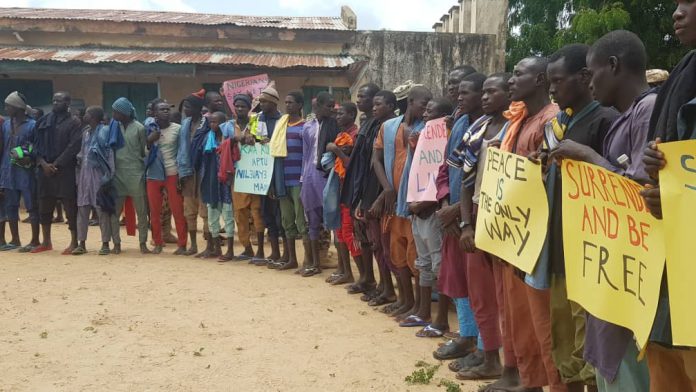 More than 100 suspected Boko Haram fighters and their families have surrendered to the Nigerian Army in Borno State.

According to Daily Trust, the insurgents surrendered to troops at Gwoza town, Gwoza local government area of Borno. It was gathered that one of the Commanders of the sect led a total of 120 people, mostly youths to the military.

A top security source told the publication that some commanders surrendered along with their families to 26 task force brigade in Gwoza.

“I think what we are seeing now is as a result of the death of Abubakar Shekau; his death has affected the group. A total of 120 Boko Haram members and their families surrendered in Gwoza town today,” the source said.

It was disclosed that the ex-fighters came with only their clothes and bicycles. The source added that the fact that they did not drop any firearm created doubt among the residents.

“The people are contemplating if the Boko Haram fighters are truly interested in peace,” the source said.

60 Year-Old Man found Dead in Guest House after Checking in...