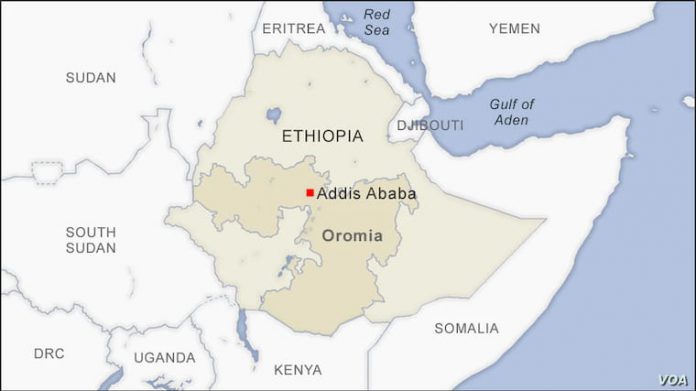 More than 210 people have been reportedly killed over several days of ethnic violence in Ethiopia’s tense Oromia region last week.

“The area’s residents and others have told the commission more than 150 people were killed by the gunmen,” the human rights body said.

The attack forced women and children to flee to neighbouring areas, and sparked a wave of revenge killings.

“In subsequent days, some residents carried out ethnic based reprisal attacks, killing more than 60 people” and triggering a further exodus of civilians fleeing the violence,” the commission said.

The panel called for “immediate action” to prevent the instability from spreading further and an investigation into why security forces withdrew from the troubled area.

In a statement, the OLA denied responsibility for the attacks. The OLA was designated a terrorist organization by lawmakers in May alongside the Tigray People’s Liberation Front (TPLF), whose rebel forces have been fighting in Ethiopia’s north since November.

The militants have denied allegations of spearheading the grisly massacres. Believed to number in the low thousands, the OLA broke off from the Oromo Liberation Front, an opposition party that spent years in exile, but was allowed to return to Ethiopia after Prime Minister Abiy Ahmed took office in 2018.

Earlier this month, the OLA and the TPLF announced they had reached an agreement to fight together against Abiy’s forces and his allies.

A spokesman for the OLA said the two groups mutually agreed that Abiy’s “dictatorship” must be removed and that they were sharing intelligence and coordinating on strategy.

The government denounced the pact as a “destructive alliance” between two groups seeking to destabilize the country.