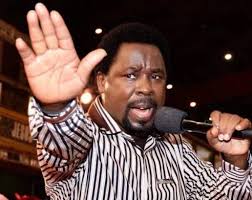 The late pastor died on Saturday, June 5 after concluding his Church programmes in Lagos Southwest, Nigeria.

Popularly known as Prophet T.B. Joshua, he has a large congregation in Lagos and was not known to have branches of his Church anywhere in the world.

The cause of his death wasn’t known at the time of filing this report.

The popular Pastor runs ‘Emmanuel television’ where he ministers the gospel to the world.

His mode of operation and his ability to perform miracles have been a source of his many controversies among the Christian communities in Nigeria and abroad.

Despite the controversy that trailed his ministry, the Christian faithful, world leaders and people of opposite faiths thronged his church for gospel and miracles.

His message was also transmitted in English, Yoruba, Spanish, French, Swahili and many other languages around the world.

On the YouTube channel, late T.B. Joshua commands followership of over one million views.

Support 2022 budget to help get our youth into entrepreneurship –...

President of Serbia Enrolls In Sport College, On His Way To...

Peaceful protest is a human right – Rihanna reacts to #EndSARS