Two women have been rescued from drowning by Portuguese president President Marcelo Rebelo de Sousa at an Algarve beach after their kayak capsized. 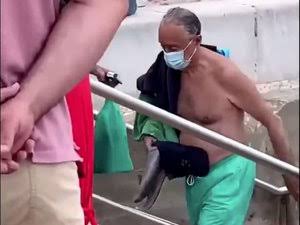 The 71-year President was pictured swimming over to the kayakers who were struggling in the water.

De Sousa later told the press that the women had been swept by currents from a neighbouring beach into the bay.

The Portuguese number one citizen is currently on holiday in the Algarve which is aimed at promoting tourism in the area.

The President noticed the drowning women shortly after he had spoken to journalists at Praia do Alvor beach.

Crossdressers, Bobrisky, James Brown ‘clash’ at an event in Lagos