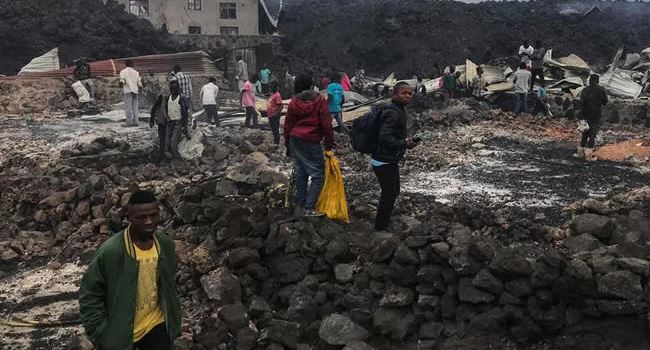 A powerful and highly active volcano has reportedly erupted on Saturday night in the eastern town of Goma in the Democratic Republic of Congo.

It was gathered that residents fled the city while officials battled to effect an evacuation plan.

The recent volcano eruption from the Mount Nyiragongo is said to be the third after such eruptions in 1977, where around 2,000 people were killed, and in 2002, which devastated the town.

As at Sunday morning, officials announced that the speed of the lava flows had slowed and local journalists reported they had stopped just short of the outskirts of Goma, a picturesque lakeside city that is eastern Congo’s hub for trade and transport.

Videos also showed property damage but there were no reports of injuries of deaths.

A government spokesman, Patrick Muyaya, said that Goma’s evacuation plan had been activated, while thousands had already fled the area on foot.

Most of the fleeing residents are said to have sought refuge across the border in nearby Rwanda.