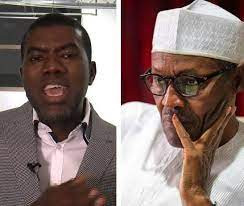 Reno Omokri has stated that he will be staging a #HarassBuhariOutofLondon march at the Abuja House in the United Kingdom on Friday, April 2.

President Buhari is currently in the UK for a routine medical checkup.

In a video which he posted onlin yesterday afternoon, Reno said the President cannot be allowed to go to the UK to seek better health care when he hasn’t accounted for what happened to Nigerian youths at the Lekki tollgate in October 2020 during the EndSARS protest.

The former presidential aide disclosed he will be flying into London tomorrow and from the airport will be going straight to Abuja house to ”harass the President out of London.” He promised to also pay the transport fare of Nigerians residing in the UK who are willing to join him.

”We must harass Buhari out of London and back to Nigeria. On October 20, 2020, this man killed peaceful, unarmed EndSARS protesters at Lekki tollgate. He didn’t care for their life. He just masaccred them. But he cares for his own life. After having dished out death to young Nigerians who were only asking for good governance for their country, this man now wants to come and enjoy the benefits of good governance. After he has given death in Nigeria, he wants to come and give life to himself in London, No! We must not allow it.

“When his own son, Yusuf, had an accident, I prayed for him. Millions of Nigerians prayed for him and then he went to kill our own children at Lekki. What were they doing? They were just asking for good governance, Asking for an end to police brutality. Till today, he has not acknowledged those killings, he has not apologised, they have not been paid compensation, parents are crying. I have reached out to so many of them.

“This man must not be allowed to enjoy peace in London,” he said.