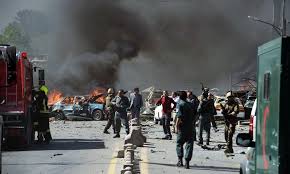 The provincial governor’s office has affirmed that at least five people have been killed and nine others were injured in the Jalrez district of Afghanistan’s Maidan Wardak province on Tuesday, October 20.

According to the governor’s office statement, those wounded include five women and four children. The blast had hit two vehicles- a bus and a car carrying civilians.

“The victims of the incident were sent to the provincial health center for treatment,” said Mohammad Salim Asgharkhil, head of the provincial hospital as reported by Tolo News.

No group has claimed responsibility for the blast as at the time of complaints this report.

Tolo News further pointed out that the Jalrez district’s Kota Ashro village “has been volatile” in the last one week adding that nearly seven days ago a car bomb explosion, targetting a security forces outpost in the area, left four personnel wounded.

Abdul Jabar, who is a soldier in the outpost, made remarks in a recorded video stating that the security forces in the outpost were under siege for almost five days.

This sad incident comes in wake of a significant increase in violence in the country. At least 15 civilians were killed in a car bomb explosion in Ghor province in the west of Afghanistan earlier this week.

According to a statement by the Defense Ministry, the commando forces “conducted an operation in Kota Ashro area, Jalrez district, on Monday and rescued the besieged forces.”