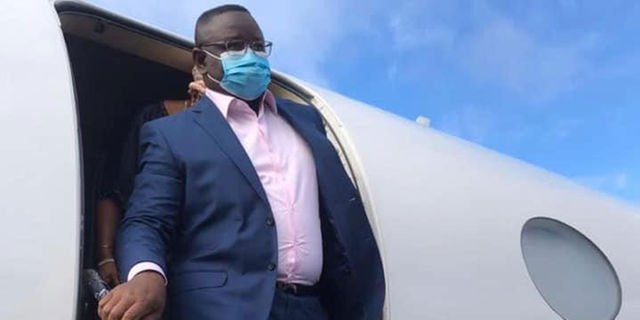 The president of Sierra Leone, Julius Maada Bio has finally returned to his country after three weeks of being away.

It was reported that Bio left Freetown on August 27 for what was termed a private visit to Lebanon which was scheduled to last for a week. However, before he left there has been report about him undergoing a treatment for an undisclosed illness.

Briefly before President Bio got to Beirut, it was revealed in the Lebanese capital that he would be air-ambulanced out of Lungi International Airport for Covid-19 treatment. The report which was made by a major Lebanese TV station, MTV, cited unidentified sources saying that the Sierra Leonean president was being awaited by the Lebanese Red Cross to be transferred to the American University of Beirut Medical Centre.

Thereafter, the government issued a concise statement through its consul in Beirut confirming that the president was, indeed, checking into a hospital, however, it was only for a “routine” medical check-up.

It added that a former Health minister would be examining President Bio. Later on, it gave an update, stating that Mr Bio had undergone a “necessary” medical examination and would be staying in a hotel for a “short recovery” before continuing with his private visit.

A week later, the Presidential Spokesman Yusuf Keketoma Sandi posted on Facebook saying the president and his wife had extended their visit to Lebanon.

On Saturday, September 19, the presidency released photos and a video which showed a masked President Bio being hailed by a fairly large crowd of party supporters as he got off from a small plane at Lungi Airport.

The opposition decried that he was no where to be found as the country battled the pandemic.

Soldiers and Terrorists reportedly killed in Fierce Battle in Borno