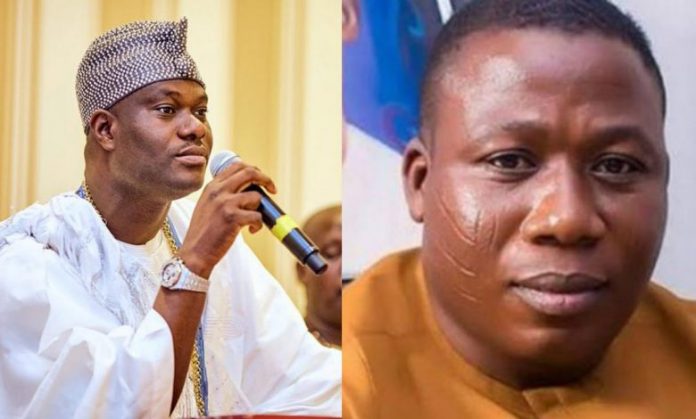 The Ooni of Ife, Oba Adeyeye Ogunwusi has revealed that Yoruba Nation Activist, Sunday Adeyemo popularly known as Sunday Igboho is currently in prison because he failed to be ‘patient’ and listen to advice.

The Ooni explained that President Muhammadu Buhari had prevailed on him to warn Igboho, adding that the activist was advised but he did not listen and instead opted to be carried away by the praises of “those who were not solidly behind him”.

“Like I have always told the government, they should have called the agitators for a dialogue. God will stay with Sunday Igboho; he grew up in Ife; all that he has become today, started from Ife. Ife and Modakeke all belong to Ife land. He is a son of the soil.

“But how he started, he wanted to fight for his kinsmen from where he came from. He stood up and fought for those killed in Oke Ogun. We thank God for preserving his life. He tried his best but when he started receiving different advice from people, it overwhelmed him.

“I visited President Buhari on his case and we discussed it. I told him that Igboho is our son; he advised us to warn him to stay calm and exercise patience but Igboho did not listen.

“Many people advised him wrongly. He listened to them. He started abusing everyone, including monarchs. After I left President Buhari’s place, I called on monarchs and elders of Yoruba land for a meeting to advise Igboho to exercise patience but he got carried away by the praises of those who were not even solidly behind him.

“He hurled so many bad words but he is still our son. God owns forgiveness. We’ve forgiven him. If he had listened, he wouldn’t have found himself in his current travail. We are trying our best to secure his release.”