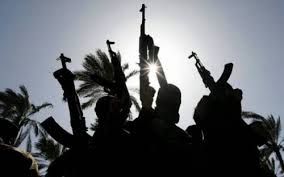 Suspected kidnappers who happened to be armed have reportedly killed a pregnant woman and absconded with her husband at Rigachikun, Igabi Local Government Area in Kaduna State.

It was gathered that the victim was kidnapped alongside the husband from their home on Tuesday, November 3.

A source intimated Punch on Wednesday that the pregnant woman has been buried according to Islamic rites.

The source disclosed, “Gunmen suspected to be kidnappers stormed the residence of the victim and took them away yesterday (Tuesday evening). Security operatives gave them(kidnappers) a hot chase and during fire exchange, the pregnant woman was shot. She was later pronounced dead in the hospital.

“The woman was due before the unfortunate incident. She has been buried according to Islamic rites. The kidnappers made away with the husband.”

According to report, the Kaduna Police Command had yet to confirm the incident.