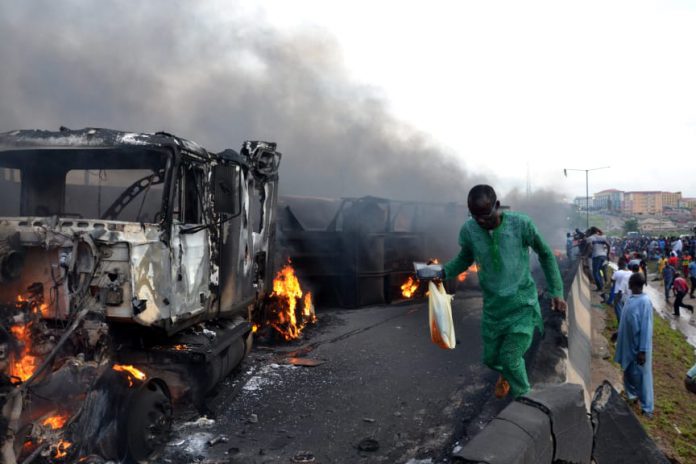 Various road accidents were recorded yesterday and many were reported to have died.

It was gathered that an accident that occurred around 11:35 a.m. at Erin-Ijesa, a town in the Oriade Local Government Area of Osun State took the lives of nine road users.

A diesel-laden tank reportedly spilled its content on the highway, resulting in the explosion of that affected many vehicles.

According to an eyewitness, it was disclosed that the tanker fell on the move and caught fire immediately.

The eyewitness stated, “Many vehicles are affected and it has even caused gridlock on the road. This is a terrible situation. Many died and got injured but I don’t know the exact casualty figure yet.”

Mrs. Adijat Basiri, who is the Public Relations Officer of the Federal Fire Service confirmed the multiple accidents.

Basiri revealed that “nine casualties were recorded while one person sustained severe burns and had been hospitalized. The fire affected 11 vehicles.”

Previously, the FRSC Sector Commander in Ogun State, Mr. Ahmed Umar confirmed the death of four persons in an early morning accident involving a Mazda bus and a Daf truck around Saapade bridge on the Lagos-Ibadan expressway.

At about that same period, the driver of a commercial bus and an unidentified male passenger were confirmed dead in a lone accident yesterday, involving the bus on the Third Mainland Bridge. The incident occurred at 6:55 a.m., just a few hours after both sections of the bridge were opened after three days of being shut for maintenance.

According to eyewitnesses’ account, the driver of the bus with number plate GGE 95 XY, painted in white, was driving inward Iyana-Oworo when one of the rear tyres burst. An adult male survivor who pleaded anonymity affirmed that the driver had been warned of his recklessness but he did not listen until the unforeseen happened.

Mr. Titilola Olamijulo, another survivor stated, “We planned to report him to law enforcement agents but he escaped this before the vehicle suffered tyre burst and he died.”

Other occupants of the vehicle were reported to have sustained different degrees of injuries.