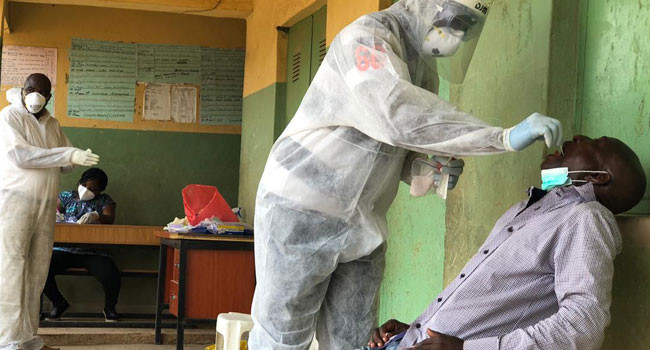 The State Incident Manager and Coordinator of the Emergency Operations Centre, Dr. Olabode Ladipo, disclosed that the delta variant of coronavirus has claimed two lives.

He revealed this to newsmen on Monday, July 12, where he also said one person is isolated and receiving medical attention at one of the state isolation facilities while contact tracing has started.

Speaking about how the virus must have entered the state, Ladipo said this might have happened through the movement of people travelling around the world.

“Contact tracing is ongoing. Two of the cases are deceased but contact tracing is ongoing. As it is, one of contact is currently in isolation in the state facility but let me assure you that every form of effort is being proved to ensure that all the contact of everyone that we have received so far in the last two, three weeks are followed up and anyone of them that is positive, we will ensure that isolation is given.” he said

Speaking about the likelihood of further outbreak of the variant in the state, the incident manager said:

“I foresee a situation in which if people actually adhere to those regulations that were spelt out, we might be able to tame that tide.”

When asked about the impact of the COVID-19 vaccine given to people earlier, Olabode said the number of people vaccinated so far is so small when compared to the larger population and as such people need to be more cautious.

“Yes, we have been vaccinated. Vaccines have been given but we need to also understand that in Oyo State just like in any other state of the federation just around one per cent of the population has been vaccinated that leaves a chunk that is still there.

“In Oyo state, we have been able to vaccinate about 90,000 people and in a state where the population of people is about 8.9 million, it has not reach the threshold that should be able to confer any form of herd immunity in population,” he explained.

Caution!!! Do Not Take Apple, Blackcurrant From Australia, NAFDAC Tells...