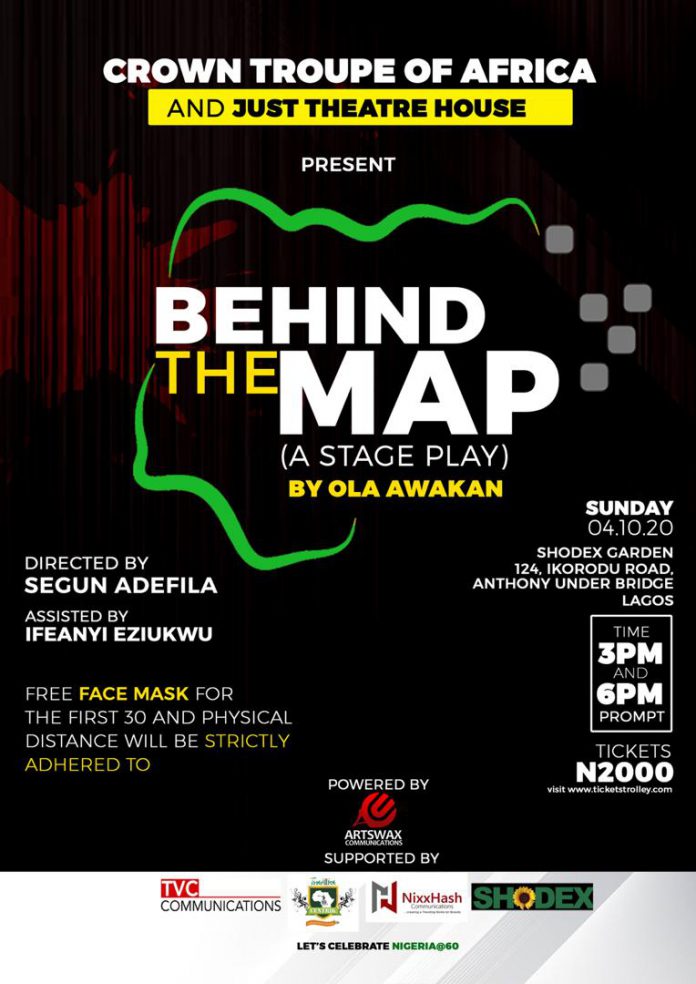 The TVC News reporter, Ola Awakan known for his numerous feature reports on exceptional children, has berated the path which Nigeria is following, stating that there is need to redirect with a better masses-oriented purpose.

While in an interview to kickstart awareness for the play *”Behind the Map”* to commemorate Nigeria’s 60th Independence, the CEO of ArtsWax Communications disclosed that the play was borne out of desire to see a better nation where all citizens will be determined to play developmental roles in actualizing the nation’s lofty dreams.

‘Behind the Map’, an hour-long play packed with action and suspense, will be shown at Shodex Garden on October 4 at the rate of #2, 000 which will come along with light refreshments for all and facemask for the first 30 persons to attend the show. The ticket can either be purchased online via www.ticketstrolley.com or at the venue of the event.

A brief summary of ‘Behind the Map’ details the conflict of interest between the ruler and the ruled taking the centre stage. The fight for supremacy on whether the national cake in the society is for the common man or those at the helm is a frequent dust raiser; the struggle beneath is that of survival while that of the leaders is that of power tussle, all these playing their roles in keeping the nation as one or putting every inhabitant apart. This begs the question: ‘Who gets to the finishing line between both factions in the saga of restructuring Nigeria?’

While recounting his experience in the course of actualizing the vision, the journalist, poet and actor who holds a Master’s Degree from the University of Lagos said, ” The Play, ‘BEHIND THE MAP’ takes a look at this course in the Nigerian society. The effect of the struggle and suffering of the people who always seek to fight for their right in protecting their immediate homeland, on the nation is caricatured in the play”.

“There is the feature of war, hate speech, ethnic disunity, militancy and political misdemeanor in the play. Everyone wants the greater chunk of the wealth of the nation to fall to his side. Among Tade, Abubakar, Emeka and Shishang, there is a twine that binds them but the same twine is about to scatter them because their parents have selfish political ambitions, which may mar not just the future of their children but that of the entire nation!”

“Many titles came to mind when I was writing this play in 2017 but the one that best describe the essence of the play is Behind the Map. The identity of every nation is best known through its map, which is the geographical confine but activities can literarily make the map beautiful or ugly, that is what I tried to explore with the play. How has our activities helped to shape the map that binds us as a people.”

“A lot of research was put into the project. I have been thinking about putting it up on stage since 2017 that I wrote the play but God made it possible this year after I discussed with Segun Adefila and Ifeanyi Eziukwu. It officially started after the Eko Theatre Carnival hosted by Crown Troupe of Africa.”

While stating that getting people to believe in the vision of nationality over ethnicity; along with finance and the right partnership posed great challenges, he admonished all to embrace peace and oneness.

In his words, “I want to pass across the message of Nationality over ethnicity. The message of peace and oneness regardless of division. Together we can restore the glory of this nation. The youth should think of what they can contribute to the nation while Government should provide enabling environment. Individuals should think inward, ‘are we acting towards the development of a sane society or not?’ I hope to partner with all State Governors, private sector and individuals who want a better society. This will make me achieve the said objectives of taking the play to all the 36 States in the country. ”

The show is supported by Crown Troupe of Africa, Just Theatre House, Theatre Centric, Shodex Garden, Nixxhash Communications, ArtsBeat Concepts, TVC Communications, the Crafters Connect, Commissioner for the Environment and many others.