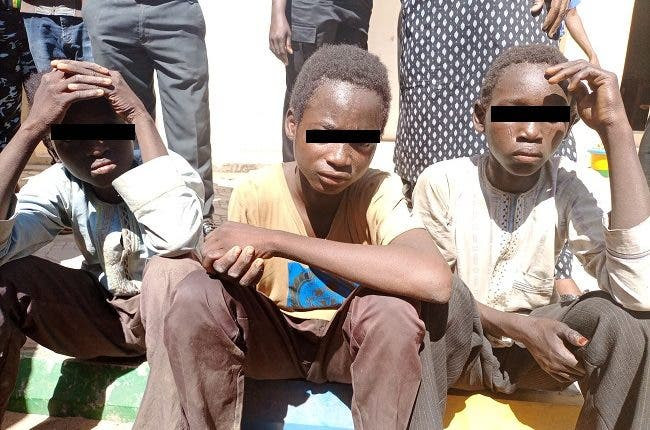 The arrest of the trio was said to have been made following the report lodged by the victim’s parents.

Speaking to journalists, the main suspect and the eldest among them, 15 year old Mamman Jauro, said he committed the act after watching pornography videos on his phone.

”She is not my wife, we only saw her in the bush where we were rearing our cattle. Her name is Nasaiba but I don’t know her before, I just heard her name when we got here, she is not Fulani but a Hausa girl, I don’t know her age too.” he said.

On his part, Buba Abdu, 14, said after Mamman finished, he took his own turn to violate the girl.

“I was together with Mamman, we raped the girl, Nasaiba in the bush in Itas. It was last week Friday. We saw them in the bush where she and her sisters went to pluck some fruits. We ran after them, while others escaped, she fell down and we took advantage to take turn but it was only two of us, the third person only held her while we violated her.” said Abdu.

13 years old Buba Saleh said that he did not take part in the raping but only held the victim for his friends to rape her.

“I only held her for a little while to enable them (pointing to his friends) have their turns.
We were in the bush rearing our cattle when we saw six girls going back home. We chased them and in the process, the victim fell down while others escaped. I then pinned her down while Mamman was the first to rape her and insert his penis into her mouth. I held her by the hand for a while after which I left her and walked away from the scene. Thereafter I did not know what happened until we were arrested by the Police and brought here.” he explained.

Wizkid’s Babymama Shows off her Fiance