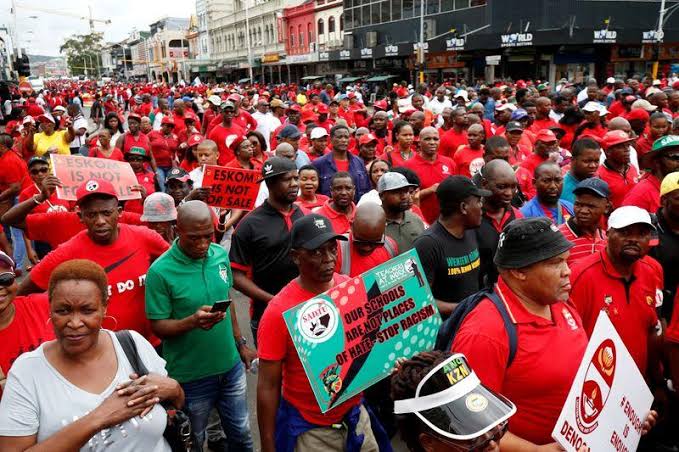 The South African Federation of Trade Unions (Saftu) has scheduled to hold a protest in order to express their grievances against the nation’s economy.

It affirmed that the trade unions will join Cosatu in a strike on Wednesday, September 30.

Zwelinzima Vavi, the General-Secretary of Saftu said a notice of strike has been submitted to strike to Nedlac in Rosebank, Johannesburg.

Vavi explained that a second strike will be embarked on by December 2, 2020, this is in addition to the three days total lockdown of the economy that will be carried out in 2021.

“We regard the totality of the unfolding calamity at all levels of our lives, be it poverty, unemployment and inequality as something that requires unity amongst all the working class formation in order to force government and big business to respond and to address the crisis that we are facing. And if they don’t come to us in terms of favourable terms in what we are asking for, we are definitely going to strike.”

Vavi stated that the country is at a point of no return and the continued lack of service delivery, job creation and heightened levels of poverty are a recipe for a civil war.

“We are finding ourselves at a point of no return. We are risking a new civil war with the levels of poverty; the levels of unemployment; inequalities and the state of service delivery by our local governments.

“We are coming in here to force a discussion and should that discussion bare no fruit, we will no doubt occupy the streets.

“We going to be occupying from Prasa to Transnet to Denel to SAA to Eskom; everywhere and we will get the protection for all those workers who want to participate,” he said.

US President, Biden to meet with Kenyatta