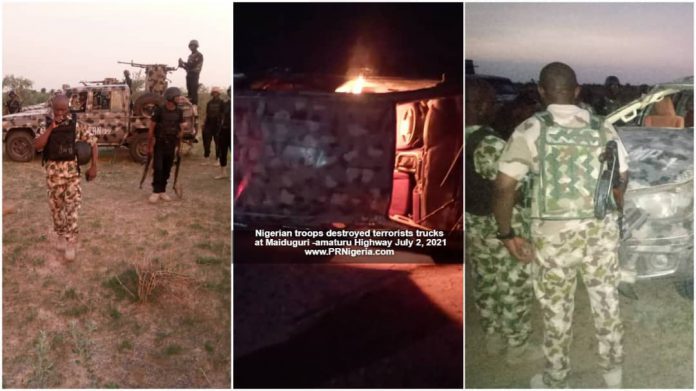 Troops of Operation Hadin Kai of the Nigerian Army have destroyed three gun trucks and eliminated 28 ISWAP-Boko Haram terrorists along the Damaturu-Maiduguri highway in the late hours of Friday.

A security news platform (PRNigeria) gathered that the terrorists dressed in army uniforms had ambushed and opened fire at a Mobile Police Force convoy who were returning from Buni Yadi between Auno- Garin Kuturu in Kaga Local Government Area.

The terrorist had killed one policeman and seized a police vehicle when a distress call was sent to the Nigerian military for a swift response.

The source said: “After receiving a distress call on the incident, a NAF MI-35M helicopter was dispatched to the location and engaged the terrorists.

“In the engagement that ensued, the three gun trucks were successfully destroyed alongside most of its occupants. Other fleeing terrorists were also cornered and eliminated by ground troops of the Nigerian Army.

“The response was well-coordinated between the Air Task Force Command, troops of  212 and 73 Battalion from Sector 1 as well as additional troops from 134 Task Force and 199 Battalion who went on the pursuit of the terrorists and eliminated fleeing terrorists at Malam Fantari village.

“At 28 mangled bodies of terrorists have been counted after the encounter”.

NAF Spokesperson, Air Commodore Edward Gabkwet, when contacted confirmed the attack and attributed recent successes against ISWAP-Boko Haram and bandits in the North West to renewed synergy and jointness exhibited by the air and ground components of Operation Hadin Kai and Operation Hadarin Daji.

He also called on Nigerians to continue to support the military and indeed all security agencies as they join hands to rid the Northeast and indeed all other parts of the country of criminal elements.

Rural versus metro support: Why SA political parties must find a...