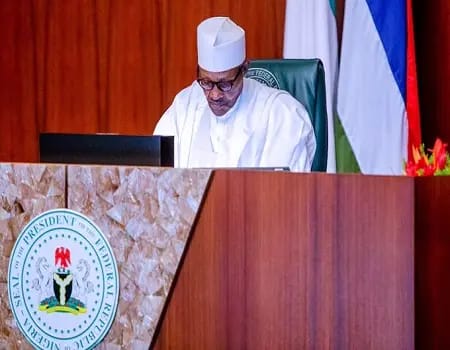 Nigerian president, Muhammadu Buhari has said while commemorating with the United Nations (UN) on its 75th anniversary that all colonial countries should be granted independence.

President Buhari called the attention of Member States of UN to the world body’s Resolution 1514 which has to do with granting independence to colonial countries and peoples.
He therefore warned that, ‘‘the quest to realise total decolonisation remains incomplete as long as Non-Self-Governing territories continue to exist.’’

The president joined world leaders in a virtual event (first of its kind for UN) because of the global COVID-19 pandemic on Monday, September 21.

The Special Adviser to the President (Media & Publicity), Femi Adesina in a statement he issued, he quoted President Buhari, saying, “On behalf of the Government and people of the Federal Republic of Nigeria, I wish to express sincere felicitation to Member States for the giant strides taken towards achieving the objectives of the Organization thus far.”

”Today’s celebration is a remarkable milestone in the history of the United Nations. It affords us the opportunity to review our progress and challenges as well as chart the course for our future.

”Collectively, we have improved and saved lives, as well as defended the rights of the vulnerable in adherence to the principles of the United Nations.

”More so, we have worked together to shelter refugees; foster development; invest in conflict resolution and peacekeeping, and promoted women’s and children’s rights. Moreover, we have jointly intensified the fight against deadly diseases such as Malaria, Ebola, Tuberculosis, and the Coronavirus pandemic.”

Talking about Nigeria’s participation at the UN, he said the country has always been a reliable partner of the UN which has helped in achieving its mandate of a more peaceful, secure and developed world.

”As an active member of the Organisation, Nigeria has contributed human, financial and material resources to several United Nations Peacekeeping Operations.

”We have also provided humanitarian aid to refugees and displaced persons; helped countries in tackling diseases such as Ebola and extended both human and financial resources as technical aid to other countries.”

He said, ”This year’s celebration is significant to Nigeria as it coincides with our Sixtieth (60) Anniversary of joining this esteemed Organization.”

He restated Nigeria’s commitment in the collective effort to rebuild the United Nations “of our dream” by upholding the principles of the United Nations including Human Rights, Peace and Security, as well as Democratic governance, saying: ”I, therefore, reiterate Nigeria’s rededication to multilateralism and the rules-based international system.

”It is my hope that this anniversary will encourage us to respond to the numerous challenges we face and support efforts aimed at building the United Nations System we desire,” he added.