The Justice System in Nigeria has always been under serious scrutiny; one of the reasons being its alleged negligence, particularly in the state of its Detention Centres and Facilities across the country.

In response to this, the 2021/2022 Civil Liberties Team of the Carrington Youth Fellowship Initiative (CYFI), an initiative of the U.S. Consulate in Nigeria in conjunction with the Nigerian Global Affairs Council (NiGAC), a public policy think-tank focused on advocating responsible governance and public administration in Nigeria,
hosted a Roundtable meeting aimed at discussing “Justice in Juvenile Correctional Centres and Borstal Institutions in Nigeria.”

Juveniles in regards to this topic refer to young offenders in Nigeria below the age of 18 who are legally too young to be imprisoned alongside adults. Therefore, they are detained for a maximum of 3 years in a Correctional Facility which can either be State-owned or Federal-owned.

These Correctional institutions were established by the government to achieve 3 main goals – Rehabilitation, Reformation and Reintegration back into society.

While a number of Correctional Centres are well managed due to State funding and monitoring, some facilities such as the Borstal institutions (three in Nigeria, situated in Abeokuta, Ilorin and Kaduna) are on the latter end and have suffered neglect from the Federal Government. Specifically, the Lagos State Government was commended for the good state of the Correctional Center for Boys in Oregun, Ikeja.

Anchored by CYFI Fellow, Michelle Agoh, the roundtable meeting gave the active players within the juvenile detention space in Nigeria as well as all the attendees the opportunity to identify the current challenges facing these institutions in the country, proffer solutions and recommendations to them.

According to the attendees, the meeting was an eye-opener to them as it gave them the opportunity to air their views on the challenges and concerns faced by juveniles in detention facilities in Nigeria.

Some of the issues discussed included Lack of mentorship (especially from ex-cons who are now leading successful lives); poor classification of juveniles as both capital offenders and unruly kids are grouped together in the same facility which does more harm than good.

It was also discovered that a high percentage of the facilities suffer from overcrowding as the population of juveniles is usually twice the capacity of the facilities. There is, therefore, a need to build more facilities and decongest the existing ones.

Also, Lack of after-care for released juveniles as no follow-up is done after they are re-introduced to the society. This as well as the general stigmatization the released juveniles face by the society often discourages them with an alarming number joining or rejoining bad gangs as a means of survival and acceptance. 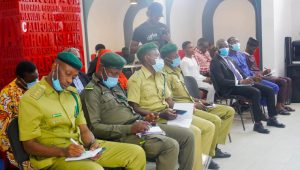 In view of the aforementioned, it was discovered that to solve these problems holistically and provide the right help for these troubled juveniles, the archaic 1962 Borstal Institutions and Remand Centres Act must be reviewed to solve the current issues.

The 1962 Borstal Institutions and Remand Centres Act is the law guiding the establishment and activities of Federal juvenile detention centers across Nigeria.

All individuals, as well as organizations in attendance, were also encouraged to use their resources to make this possible and move the Nigerian Legislators to make this important decision. A partnership was forged with NIGAC to spearhead the review of the law, so as to ensure a policy reform.

In regards to this, the CYFI body announced that their team would be converting critical parts of the roundtable meeting and a digital skills training that was previously delivered at the Correctional Centre for Boys in Lagos, into a documentary.

The documentary will be broadcasted on various media platforms to improve public awareness and drive advocacy campaigns.

The CYFI Civil Liberties team made up of Rafiat Atanda, Babajide Macaulay, Michelle Agoh and Imade Iyamu, especially appreciated the U.S. Consulate in Nigeria, the CYFI body, and all attendees for their contributions, funding the project, and providing professional mentorship, respectively.